Have you ever competed to rent a flat?

You will in Shanghai, especially for a room in a shared flat!

Just a quick reminder: As you can see from the title, this is an article that has two parts. If you landed here first or wanna remember what happened at the beginning and wanna take a look at the first steps of the guide, you can check out Part I.

In Part II, we’re gonna see the real action and the last steps for the guide of “How to find an apartment/a room in Shanghai?”here. Let’s keep going.

What happened after a week?

As time goes, washing the dishes in the bathroom as there wasn’t a sink in the kitchen and not having a shared area didn’t feel like a real home any more. Eventough I had nice roommates, our schedules were different, so it was hard to see each other. After a while, I started to see bugs in my room,ugghhh!! Moreover, my landord moved into the next door with his girl friend and started to smoke eventhough it was one of the rules that no one was allowed to smoke in the house. I even kindly asked not to smoke inside the house, but nothing changed as he was the boss, so it was high time for me to look for another place.

Again, I turned to smartshanghai.com and I visited one place, let’s call it as “House 1” in order to avoid any confusions. I Ioved “House 1”…the house, the view, the room, but the landlord, and let’s call him “Landlord 1”, told me that the two rooms were taken by two French girls and he sent me their pictures as well which was a little bit weird. I kept looking and as I was visiting another house, “House 2”,  which was also great, there were also other people in the house, checking the rooms. I immediately recognized the two girls among the others from the picture that “Landlord 1” sent me.  This should have been a sign for me…

I was totally ok with “House 2”. As the “Landlord 2” promised to keep the room for me, I literally ran home to talk with my landlord. At that time, my current landlord was a nice person so he told me that he would pay back the money only if he could have his agency fee back. I wasn’t ok with that, I said I would give it a try but I couldn’t promise as this was out of my control. In order to get his agency fee back, the agent guy told me that if I worked with him again, they could return the half of his money back, so I said ok. I also asked him to call “Landlord 2” to make sure whether the room was still available or not and if it was, I would be there ASAP after getting the money from the bank. After 5 minutes, the agent guy called me back and told me that they were still keeping the room for me, so the action started.

In half an hour, I was at “House 2” with my landlord, his girl friend and the agent guy. “Landlord 2” and his wife were so surprised to see us. You should have seen their faces. I was like “Hey, remember me? It’s me, the girl that you were keeping the room for.” As we walked in, I saw a guy sitting on the coach, let’s call him “the couch guy”,  and reading a paper which turned out to be a contract. As “Landlord 2” and his wife were still looking so surprised, I couldn’t help and asked if everything was ok showing the money with me. They told me that “the couch guy” came here first with the money.  I was like “What? Really, seriously! Eventhough I was two minutes away coming with my money…”. I couldn’t believe my ears. I asked the “Landlord 2” that why he didn’t wait for me as he promised. They were still so surprised that it started to get annoying. At some point, I lost my calmness and with a higher tone I asked “Landlord 2”: “Why are you looking so surprised? I told you that I was coming back to book the room and you promised me to keep the room in front of everyone and on the phone. I even talked with my landlord and I got my money back… and now I am homeless thanks to you.”

There was another tenant who turned out to be my neighbour and friend later on, in the living room while all these discussions were going on. She told me that she had gone through the same things. She wanted to rent another room in the house but “Landlord 2” had given the room away to the person who came with money first, sho she had to book the other room in the same house not to be homeless. You see, how money is more important than business ethics for some people.

They were still surprised. “Landlord 2” told me that the agent guy didn’t tell them that I was coming with my money. This was the moment that I was ready to jump on the agent guy. Ohh God…“The couch guy” was like watching a theater and he was this close to be completely in shock…

Bargaining with “the couch guy” , the other potential tenant? No way…

The wife of the “Landlord 2” apologized and she wanted me to bargain with “the coach guy”. I said “what?!!” I was literally in the middle of a breakdown. I was this close to look for a camera that was supposed to pop up and say “busted” and I was gonna get the room eventually but this wasn’t a joke. Everyone was still surprised. Yeah this is the word of the day: ”surprised”. I slowly walked towards “the couch guy” and whispered (I had no idea why I was whispering) “Hey, do you know what’s happening around you?” The couch guy started to explain his situation to me and I said “ok, you’re right and I am right too. The thing is, they want me to bargain with you.” He said “What! I am not gonna bargain, I was here first.” I was like “Ohhh, what am I even doing here?” and then I walked out of the house and my landlord, his girlfirend and the agent guy followed me. I was yelling at the agent guy,  saying that “this was your job and why didn’t you translate a simple sentence.”  He told me that he did but the landlord didn’t understand. So as you can see, someone was lying but finding this person wasn’t going to change my situation.

After the breakdown and felt homeless, I decided to book the other room in the second floor of “House 2”, eventhough it was over my budget. So, the agent called the landlord and then he turned to me with a sad face and told me that this room had been also taken 5 minutes ago. I was feeling like “again” and sat on the stairs of the building’s entrance feeling homeless and helpless. I hope God helps homeless people.

I remembered that the two French girls I saw earlier, didn’t book the rooms in “House 1”, so I called “Landloard 1” immediately, but he wasn’t answering. I kept calling and calling, then he turned to my calls and he was there in 5 minutes. At the end of the day, I booked the room which I fell in love with the view in the first place… Finally, I was happy and relieved.

How my landlord counts money

The last step of “How to rent an apartment or a room in Shanghai?”: How to register your address?

The last step was going to the nearest police station to register/change my address. You need to go to the nearest police station with the original and the copy of your rent contract, your passport and the copies of your passport’s first page and the visa page.  This procedure doesn’t take too long. You have to do this, otherwise you have to pay a considerable amount of fine including the interest for the days you haven’t been registered. If you change your address, you need to do it again at the police station that is responsible for your zone. 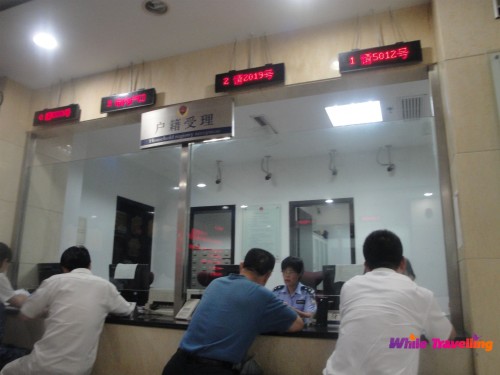 You should go to the “Household registry department” in the police station.

My house hunting adventure on how to rent an apartment or a room in Shanghai that I just shared with you is just the summary of the things I’ve been through. There are more details in it that still don’t make sense and make me say TIC (This is China) but I think this summary is enough to give the main points.

The lesson I’ve learnt from “how to rent an apartment or a room in Shanghai?”, my house hunting experience is:

“The competition to rent an apartment or a room in Shanghai, especially to book a room in a shared apartment in Shanghai is fierce. You have to carry your money with you during the house hunting period to get the room you like immediately.”

It seems like there is going to be more adventures about my house,  as the windows seem to make the upcoming winter harder, but till then I am enjoying my house (House 1) and the view.

My house in Jing An, Shanghai

Hope you can find your place without any trouble since now you have everthing you need here.  If you want to remember the first steps in how to rent an apartment or a room in Shanghai, please see Part I. Keep us posted about your house hunting adventures and thoughts if this post is helpful and let me know if you’re around Jing’an Temple as we can be neighbours.

AsiaChinaRent a flat in Shanghai

You are beautiful today! Don’t let anyone convin

Looking at the most iconic buildings of Lujiazui,

Getting back to my healthy eating🙌

The system is having a breakdown and I believe tha

I simply love to see how people unite and work tog

WHAT TO DO IN PAPUA NEW GUINEA? Hopefully I’ve got you a bit warmed up about Papua New Guinea (PNG for short) in my...