Part III-How to rent an apartment or a room in Shanghai?

As you remember, it wasn’t easy for me to find my current apartment…If you can’t remember my house hunting adventure, have a look at Part I and Part II, but don’t forget to come back…Alright, let’s keep going.

As I told you what happened in part II with “House 2” which I wanted to move in but they had given the room “Couch Guy” couple of minutes before I arrived “House 2”. Well, I had a neighbour, Latetia, who at that time was living in House 2, texted me saying that her landlord, Landlord 2, wanted everyone to move out immediately which was against their contract.   I was like “What???!!??!”. She was lucky as she was able to move into her school’s dorm room the same night, but she told me that some of her flatmates were travelling at that time and had to get back just for that!!!  Can you think of yourself being in this situation? Another French guy from “House 2” had to leave all his stuff in our apartment for days till he found another place. Another guy from House 2 called the police and when the police showed up, they learnt that Landlord 2 wasn’t the real landlord. He rented the apartment from the original landlord who wasn’t living in Shanghai and he was subletting it to those people, therefore the contract they made was not valid either. Gosh!!! If I had been able to move in to “House 2” in the first place, I would have been one of them looking for a new place desperately. This is not all of the story, Landlord 2 also cut some of their deposit!! What a Jerk!!!

What about my landlord? After a while, related with having my residence permit, I had to go one of the police stations to register where I live…and guess what I learnt? My landlord, Landlord 1, also wasn’t the real landlord. He sublet the apartment to us! Hope nothing bad happens! The thing is: subletting is quite common in China, eventhough it is not illegal, you don’t have a word to say if something bad happens!

Winter was a big challenge for us…Thanks to our one layered windows in the apartment…The wind was coming through the windows like we were already outside…Our curtains were all flying during this time…I even asked my landlord whether we can fill the gaps between the windows with slycon or not…but the answer was a big NOOOO!…When we were sitting in our living room, we were all in our beres, scarves, hand gloves and coats which was making us laughing out laud most of the time when we see each other like that. The only heating system is the air condition which skyrockets the electricity bill. So, in order to avoid having a huge bill, sitting with many layers on was the only solution.. plus drinking hot water or tea…I remember that at some point I was wearing 8 layers! 8 layersss!!! I am telling you, it was really heavy to carry all those stuff on me!

The washing machine…How to use it and what about hot water? 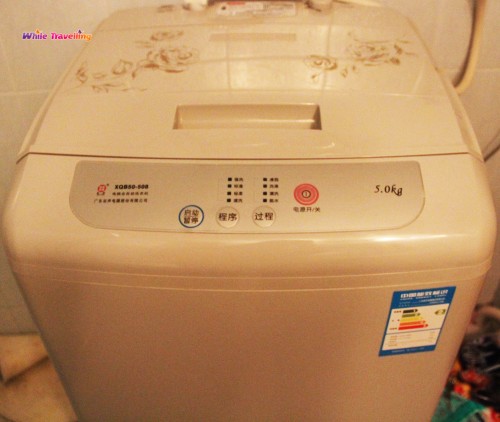 In China, most people don’t have a washing machine and dish washer, even some wealthy people too! So I was happy to have a washing machine in my house, except the instructions and buttons on the machine were in Chinese so I had to ask the AYİ(Here this is what they call to cleaning ladies) which one to push. Besides,  I couldn’t think of asking whether the washing maching was using hot water or not! If you’re gonna ask why that is important…I’ll tell you..Cause all my white clothes have turned into grey!!!!!

When I was done with seeing my white clothes having turned into grey! I started to think about solutions as my landlord again said a big NOOO to build a new water pipe system just for that!!! and the solution I found was: Adding hot water from the shower tab to the washing machine with a big washbowl! I was worried at the first time whether this would not be a good thing for the machine but it’s still working and my clothes look better after they are washed. So my technique is approved!

Still a foreigner in the house?

The reason I chose to live in a shared apartment was that I didn’t know anyone when I first came to Shanghai and I didn’t wanna feel alone in the house too…So that I can hang out with my flatmates and cook meals together…Well, this is a common expectation among expats who just moved into a new country…When I was looking at the shared apartment ads on the internet, I even saw an ad whose landlord put a clear message to all potential flatmates saying that “don’t expect me to be your best friend! I want my own space and I am not an outgoing person and you can’t change it.” That was really funny and awkward too! The other thing is, when you’re living in a shared apartment, having different nationalities in the house is so much fun…But my situation was completely different at the beginning…

I was the first one to move in to “House 1” and there were 2 empty bedrooms…One day my landlord came home and told me that there will be 4 people coming to see the rooms…I was like ok…When they arrived, my landlord was giving them a house tour which was a little bit interesting…3 French people and 1 American girl…At the end of the tour my landlord turned me and asked me “with which ones I would like to be flatmates?” in front of everyone! I was like huhhh???!!!!…Of course as 3 French people were friends(1 couple and a girl) the American girl said she could look for another house…So couple of days later French people moved in…Eventhough we were trying to hang out together, the spoken language was French…At some point I really wasn’t having fun at all! I should admit that it killed the little interest of learning French in me cause you started to feel as a foreigner in the house too which sucks…I have really sweet and social French friends who like to hang out with different nationalities rather than being stuck in a French group, so I am not going to generalize people…After that experience, I really wanted to move to my own place for the next year but now I have new flatmates from different countries which is great…

So, before you move into a shared apartment, consider the atmosphere in the house and try to meet your flatmates or at least have a chat before you or they move in and if you do and if have a word to decide, have different nationalities in the house like United Nations…You don’t have to hang out or cook together but it will be a bonus if you can…

Finding your flat door wide open as you come home…

As the French people went back to France, my landlord was coming to the house to show it to the potential tenants…I wasn’t ok with his visits as they were quite often…But one night, as I came back to home, I saw that the flat door was wide open! Immediately I thought that there was someone inside or somebody stole something,  but then I saw my bike in the same place so theft was not a strong possibility….I was shouting like “is there anyone inside?”…As if he/she would have replied, if there had been really someone inside…I couldn’t walk in for a while and then called my landlord to tell him the situation… He said he was there thirthy minutes ago and he might have forgotten to lock the door! I was like “whatttttttt!!!” Man! Anyway, I got in and checked the back of every door and every room just in case…But later on the same thing happened again!!!

If you face with a situation like that, tell your landlord that you will cut off  some percent of the next month’s rent! Really! Eventhough Shanghai is a really safe place, better to make sure that your flat door is locked!

After my Thailand trip, this time I experienced another situation with the door…

In the middle of the night! Really I wasn’t able to get in due to my key was broken inside the lock! I went down stairs to talk with the security guy of our apartment . He called the locksmith he knew and he was here in 10 minutes but it took him one hour to get me in and cost 480RMB( 80USD, 190TL)  for a crappy key. I am sure they splitted the money. You know here, foreigners are seen as a big revenue source more than anywhere else!! 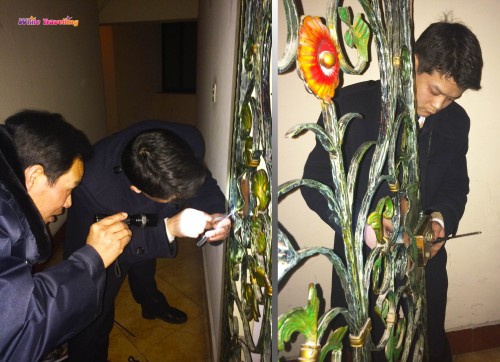 Better to get the number of the locksmith close to your place, before experiencing anything like that and being robbed off…

When I was tutoring Finy, a lovely Chinese lady, in my living room, somebody knocked on the door…I wasn’t expecting anyone, so I was like “who can this be?”…When I opened the door, I saw a Chinese man showing me a device in his hand and wanted to come in…I couldn’t understand his accent,so I asked Finy to help me…He turned out to be the gas man, I mean the man who checks the gas whether there is a leak or not…As you can see there was a gas leak in our kitchen!!! I was so luck to have Finy with me, otherwise I wouldn’t let the man come in…ok, let’s not focus on what would have happened if I had been alone…He mixed the soap powder in the washbowl and put it around the pipe and yeah we have a big bubble showing that there was a gas leak! How nice…Then he wanted us to call the number he gave…Finy called the number which is the hotline for the gas leak situations. The man from this service came in half an hour and fixed the pipe and controlled it one more time. Yeah, we were safe! Thanks God!

Although there were ups and downs during this 10 months time, I am  still happy with my apartment!  I learnt a lot of things. I saw that I can survive in any place but still tones of ways to go! Check out the next article about the most important thing you will need when you move to Shanghai: AYİ, the hero of your apartment

What about you? What kind of things have you experienced and learnt during the past 10 months? Share with us and let us learn from your experiences…

Hangzhou, the paradise in China Guys, I was looking for going on a day trip just before flying to Turkey. One of my friends told me...