The 7th Wonder of the World

You are in Siem Reap, the city of temples, home of one of the most astonishing and enduring architectural achievement, Angkor Wat…You’re gonna either watch the sunrise at Angkor Wat or watch the sunset or getting lost in Angkor Wat temples and chased by monkeys, kidding, well this is another story for sure haha…

Now I am going to take you inside Angkor Wat, for more pictures follow us on our instagram account, the purpose of the pictures is to make you move from your coach to save money, plan your trip and finally come here to see this ancient temple with your own eyes because…

It’s better to see it with your own eyes than hearing about it thousand times.. 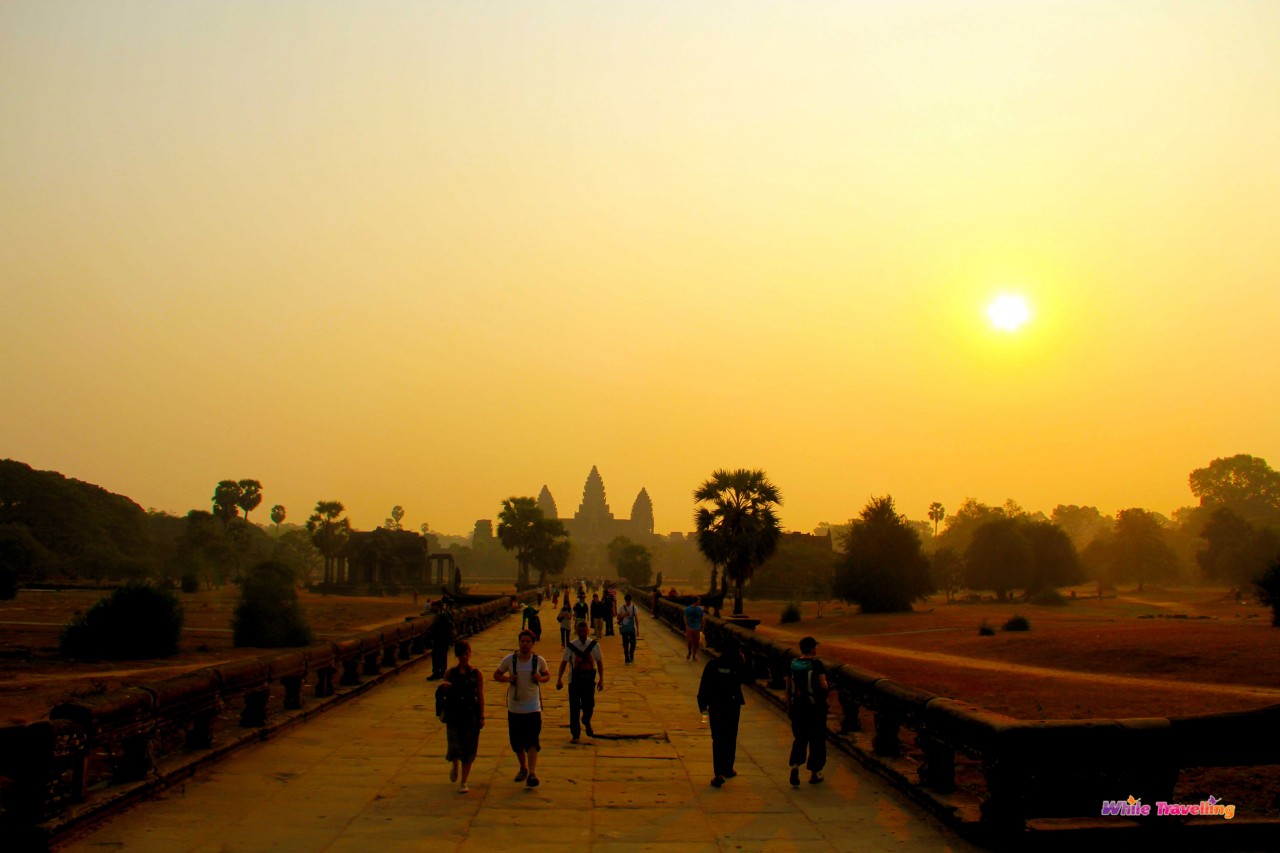 As we watched the sun rising above Angkor Wat, it is time to go inside to explore more and learn more about this myterious sanctuary…As we are getting closer to Angkor Wat,  we’ll dive into the history of Angkor Wat…

After the sunrise, more and more people start to visit Angkor Wat. 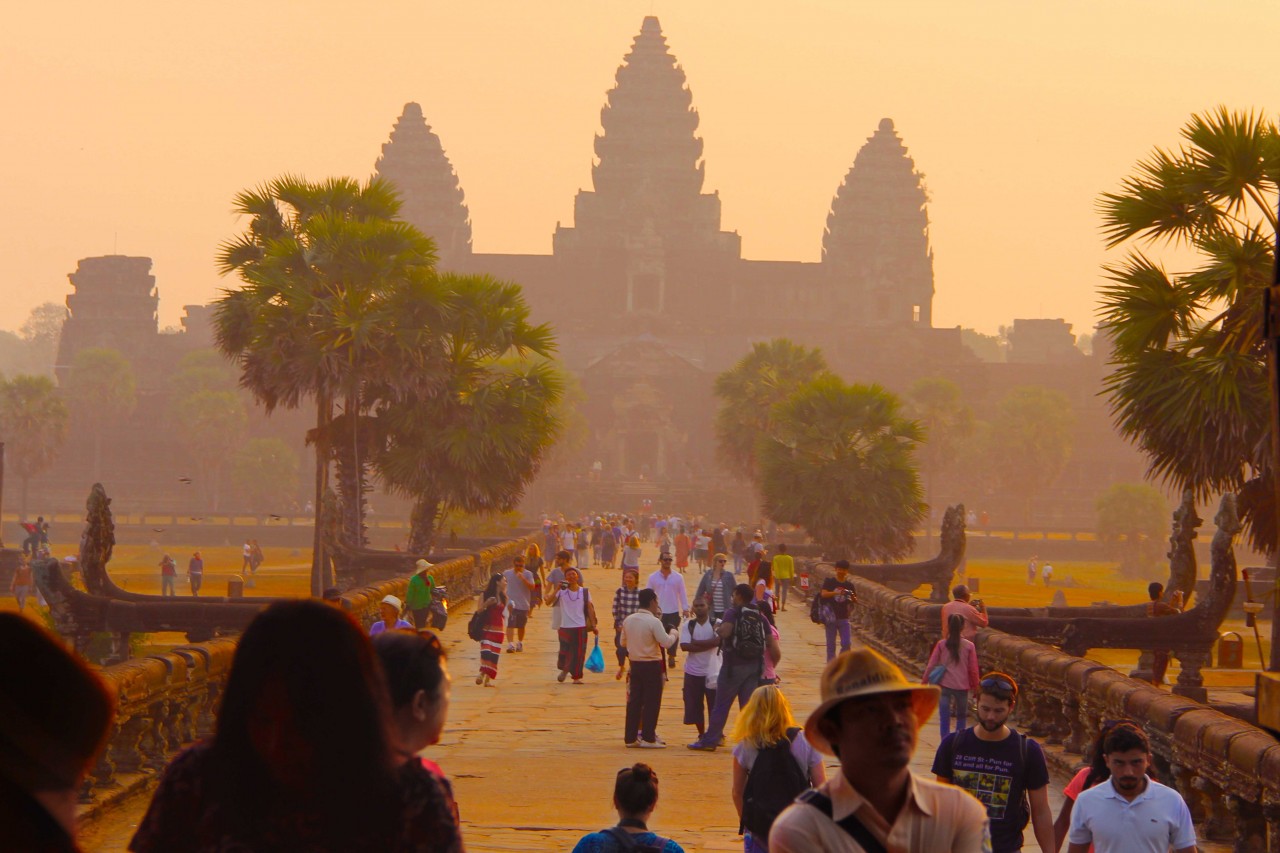 Are you ready to discover Angkor Wat? 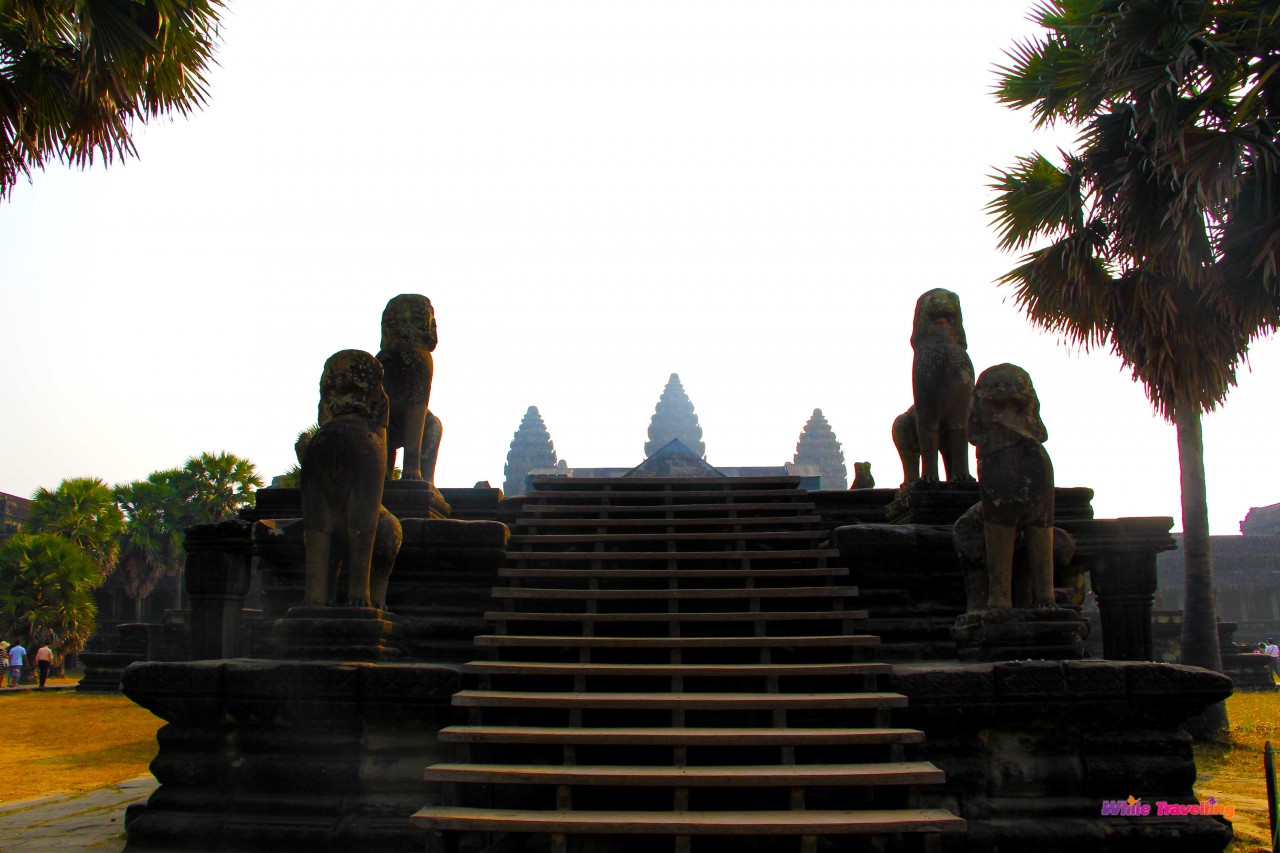 Look at the crowd coming from the entrance, I’m glad that I arrived Angkor Wat early in the morning… 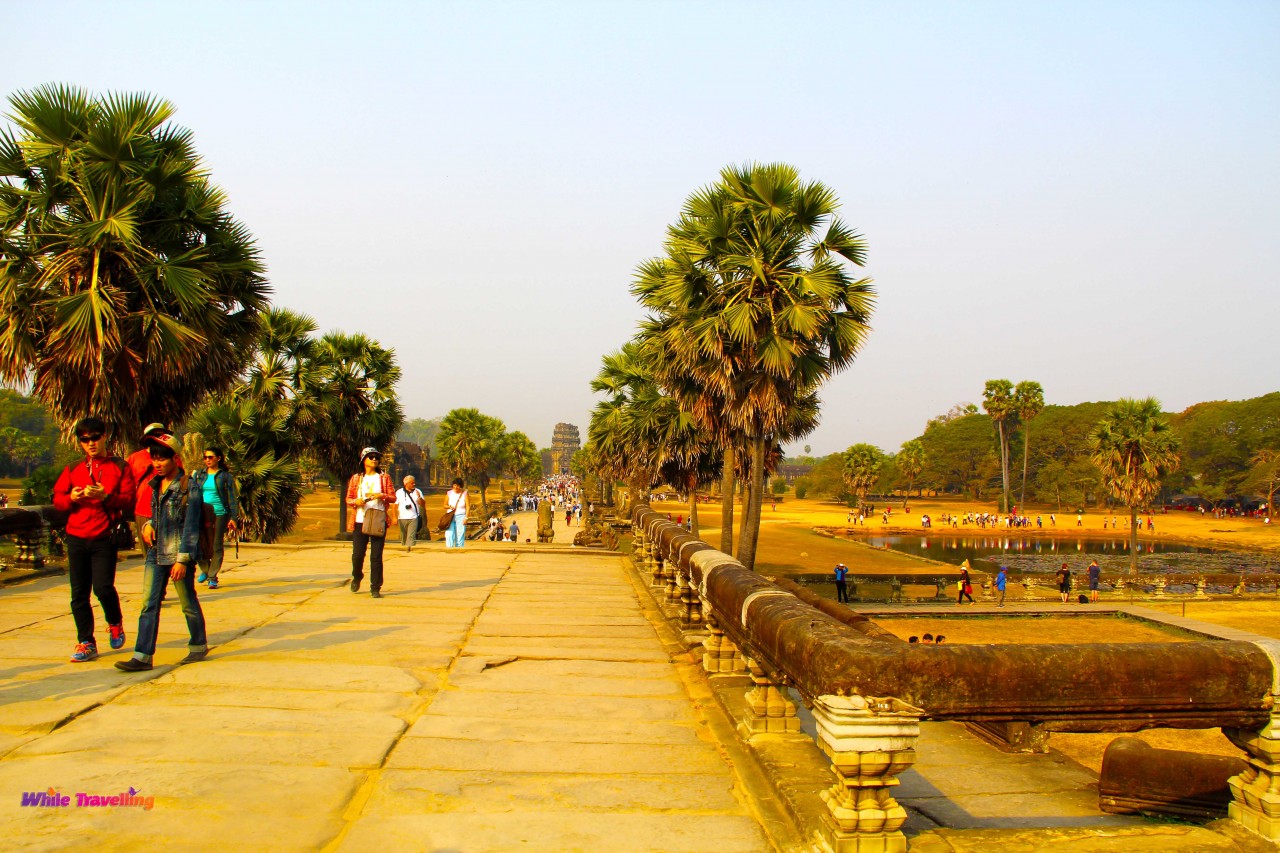 As I climbed the stairs, I could see the hallways both on the right and left…

But what did Angkor Wat stand for in the ancient years? 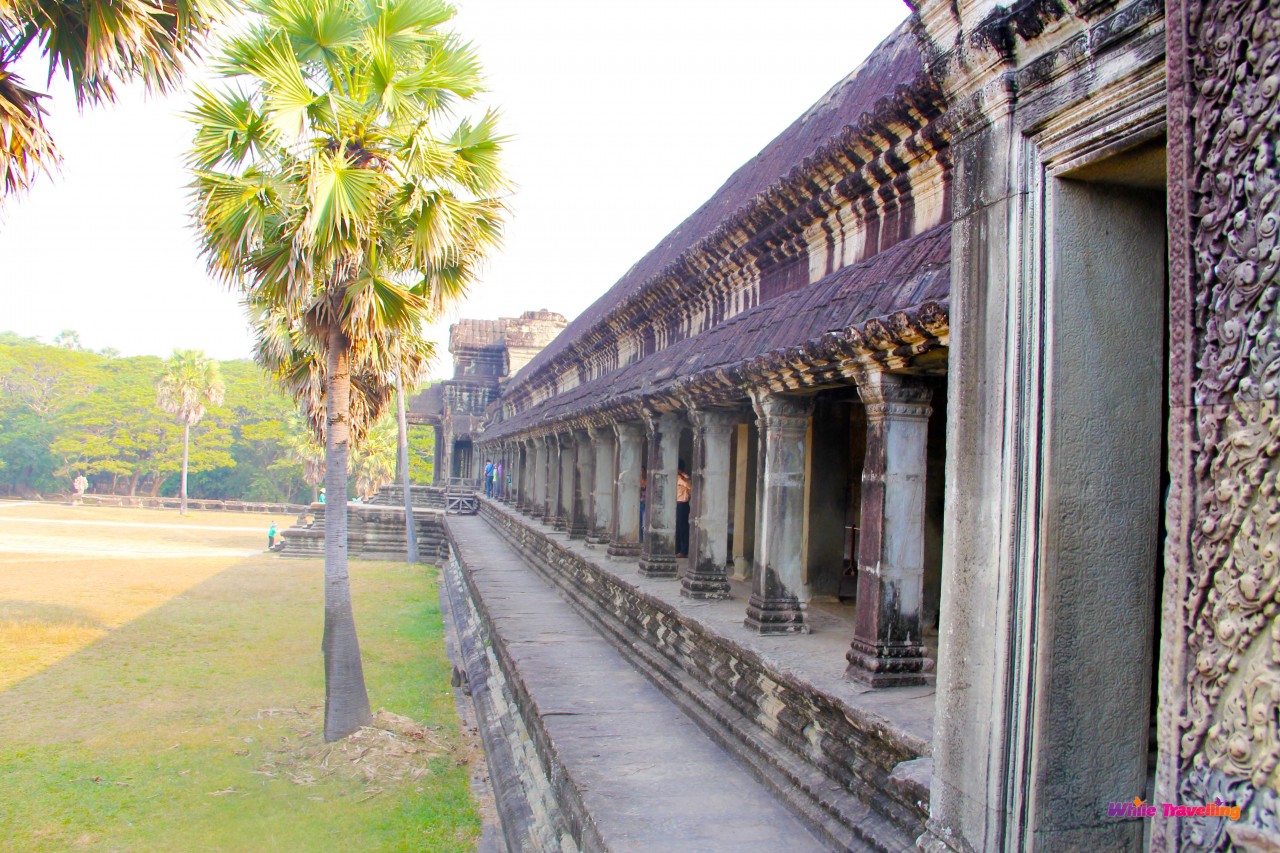 As being a travel blogger, taking pictures is far beyond passion for me, I take like 132189753pictures when I travel, by the way daily hahaha…so everytime I pack my bag I have more cables, photography equipments than clothes haha, I love that! Here is me taking pictures with my selfie-stick. 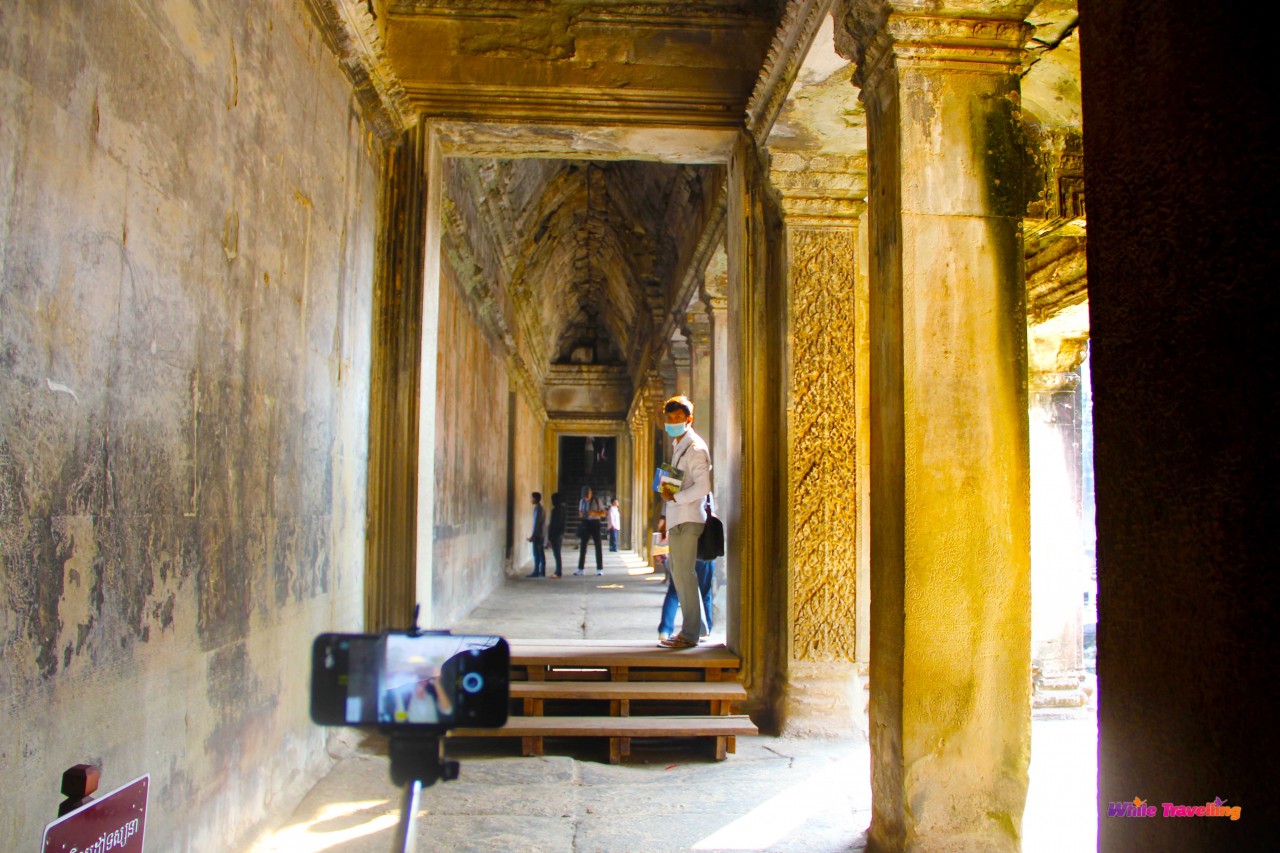 While walking on these old pavements, stones, climbing the stairs…close your eyes and imagine how it would be to live back in then…how many lovers, how many ideas, how many tears , inventions passed through these steps… 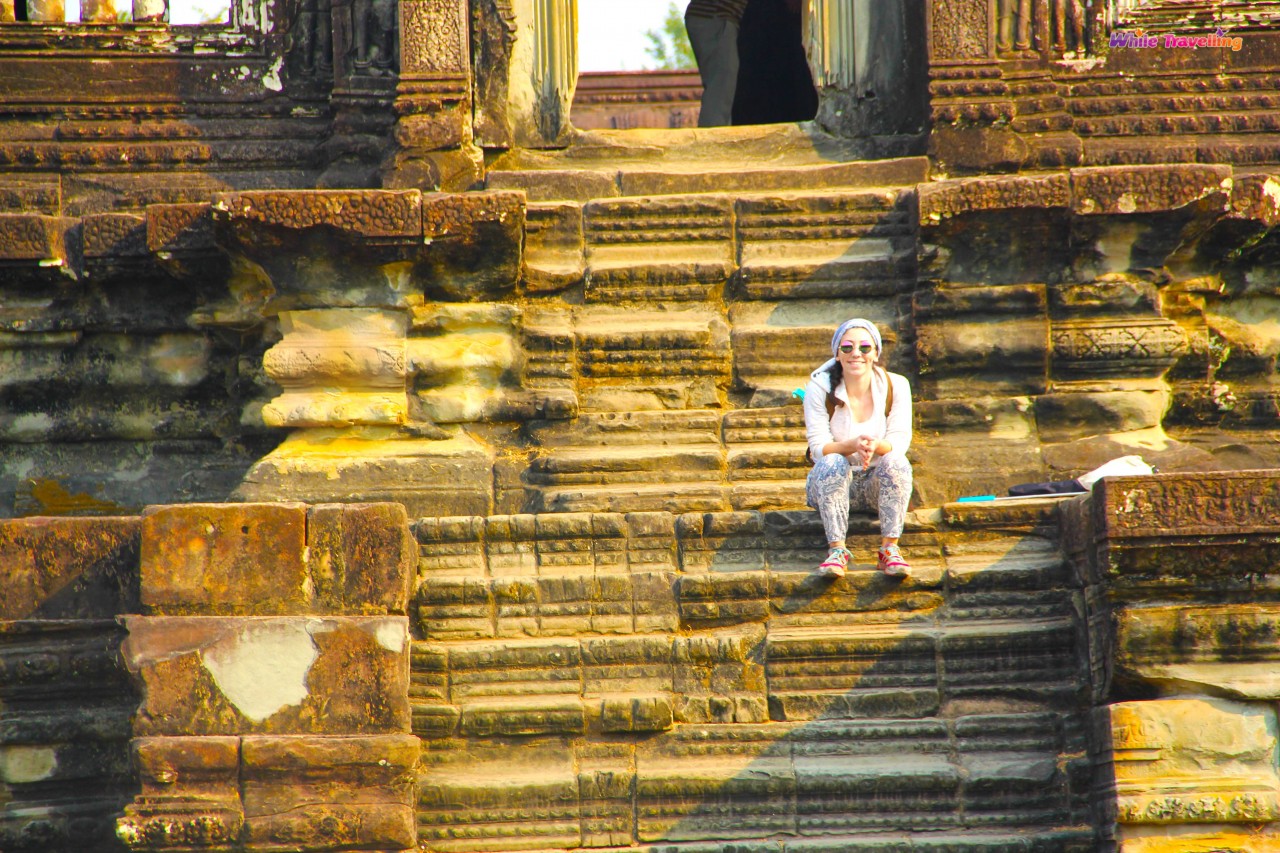 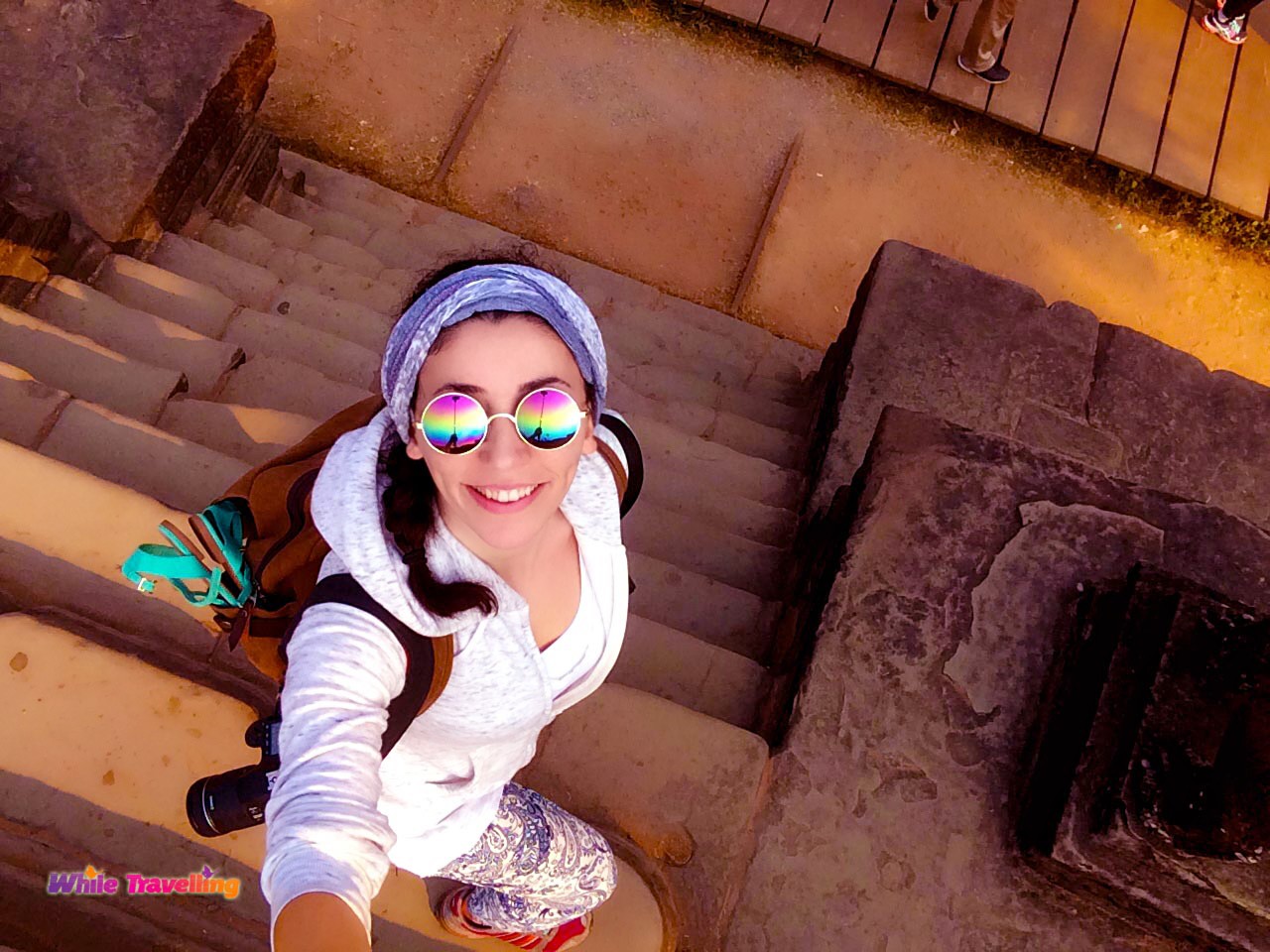 but…the view at the top is so worth it… 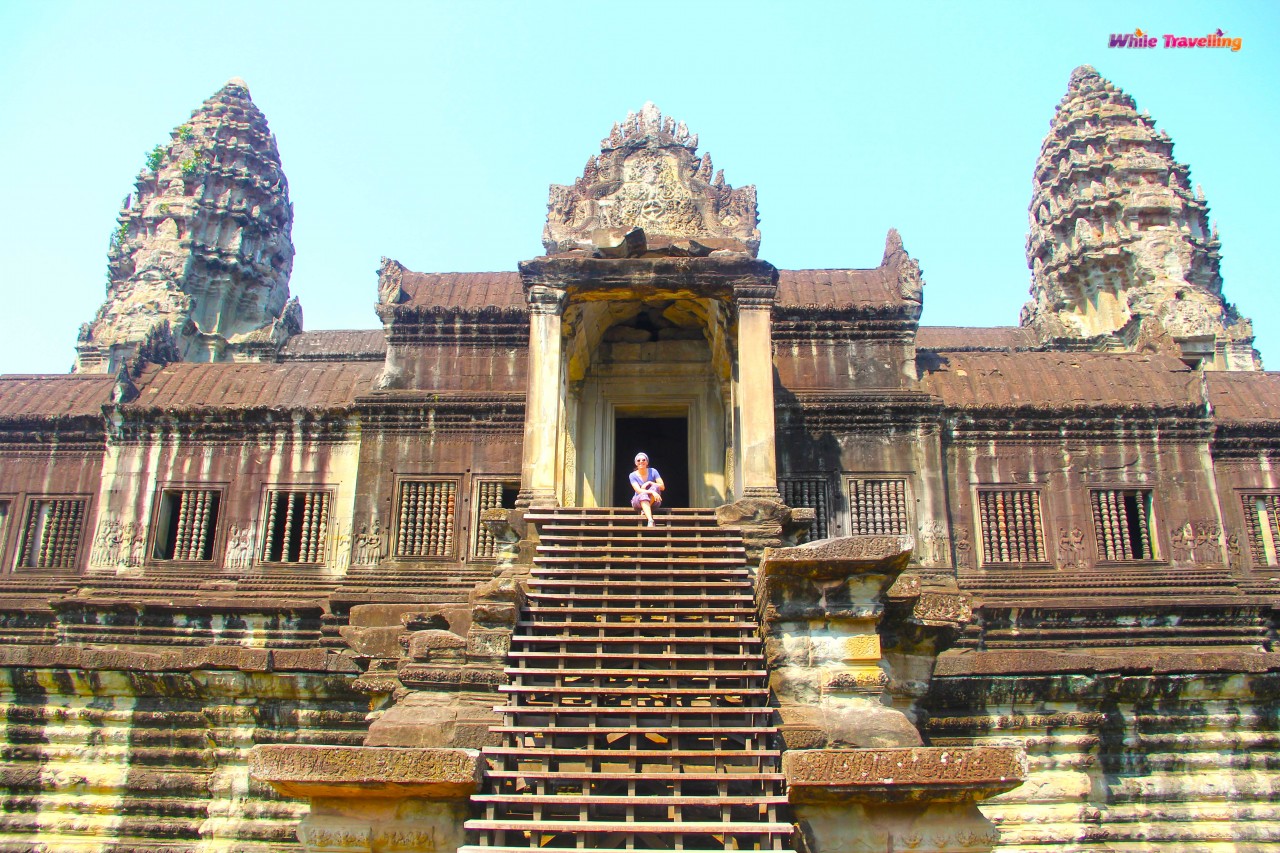 Watching the view, tourists motions, birds and vibrations in the air will give you a lot of clues about this place…Take your time, don’t be in rush while exploring Angkor Wat… 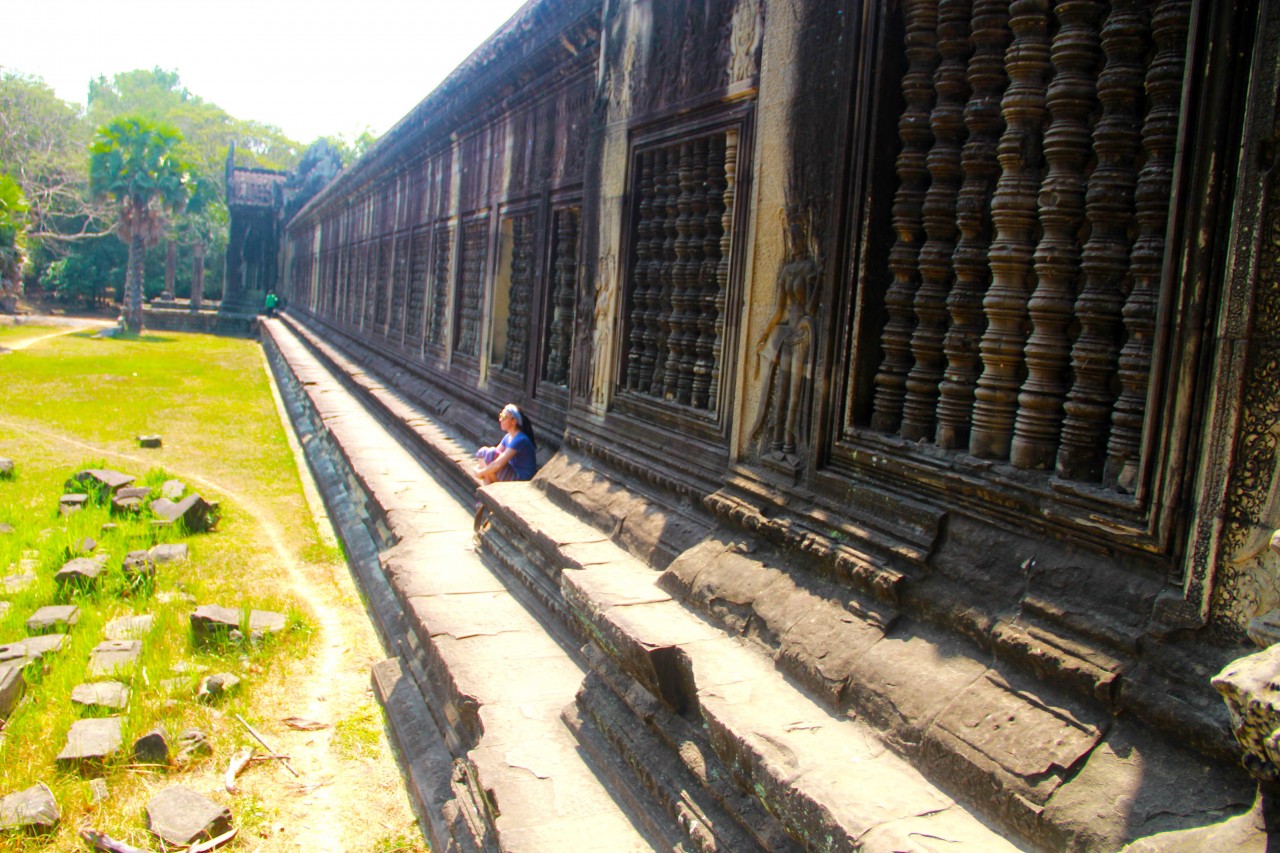 While exploring, I feel alive like I’ve never been before…This is what makes me alive and learn more about myself and the local culture…It is strangely beautiful to be able to connect with myself and the culutre in a deep level at the same time. 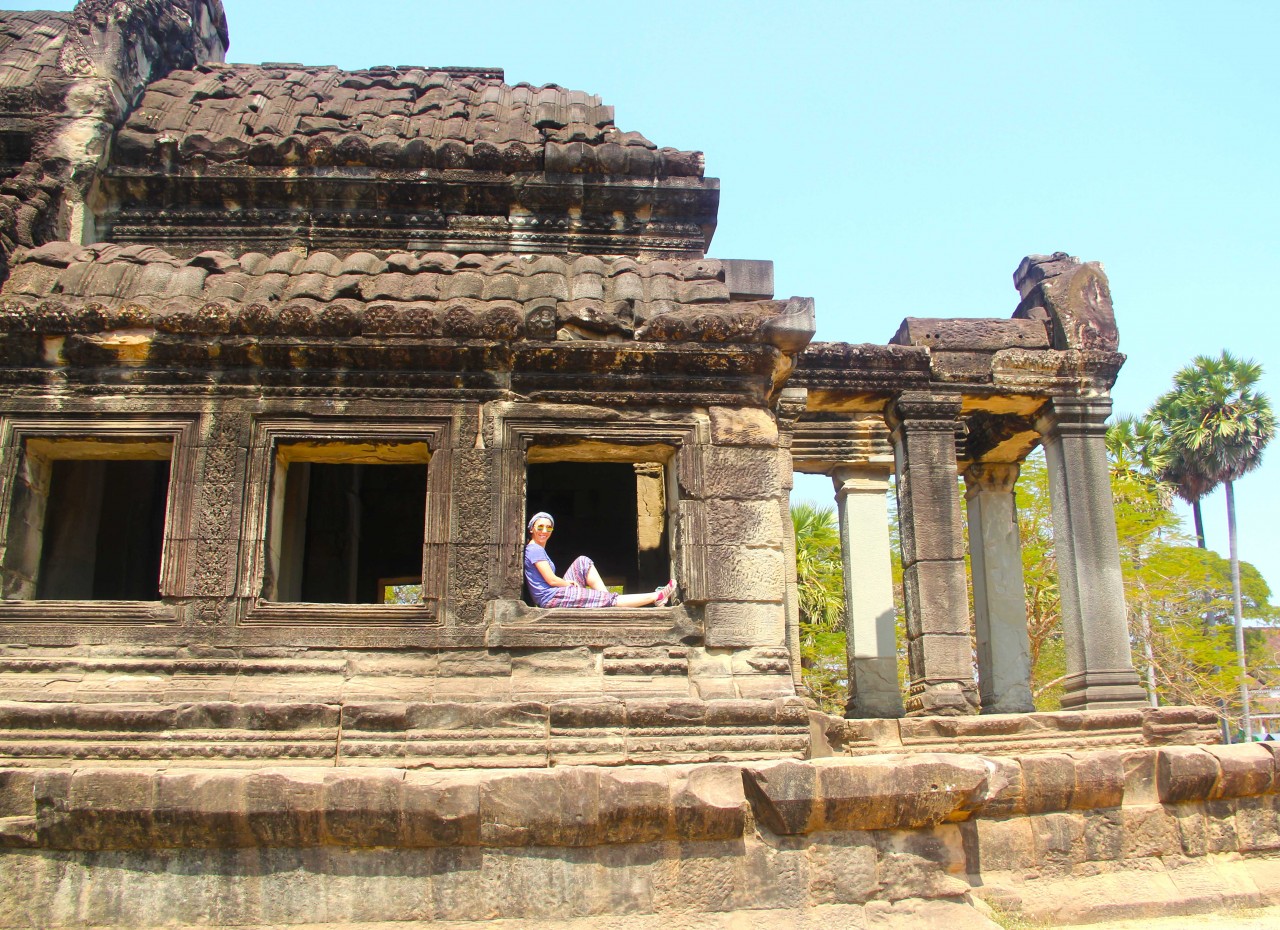 Did you known that Angkor Wat was also called “The city lost in the jungle” or ” The mystic city of gods”? 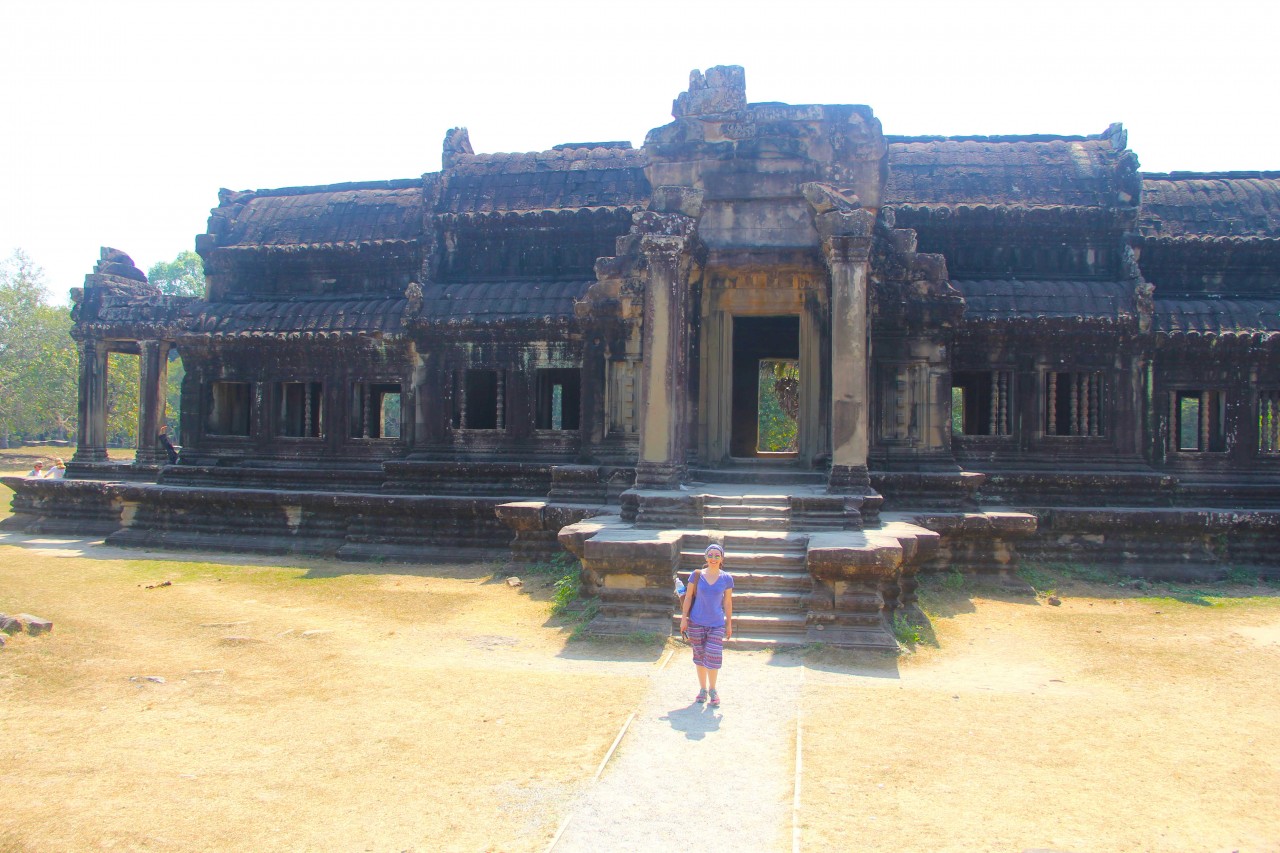 Angkor Wat is huge, so huge that you always have these feeling of you’re missing a part of it and that’s why keep getting lost not to miss anything and record most of what you’ve seen… 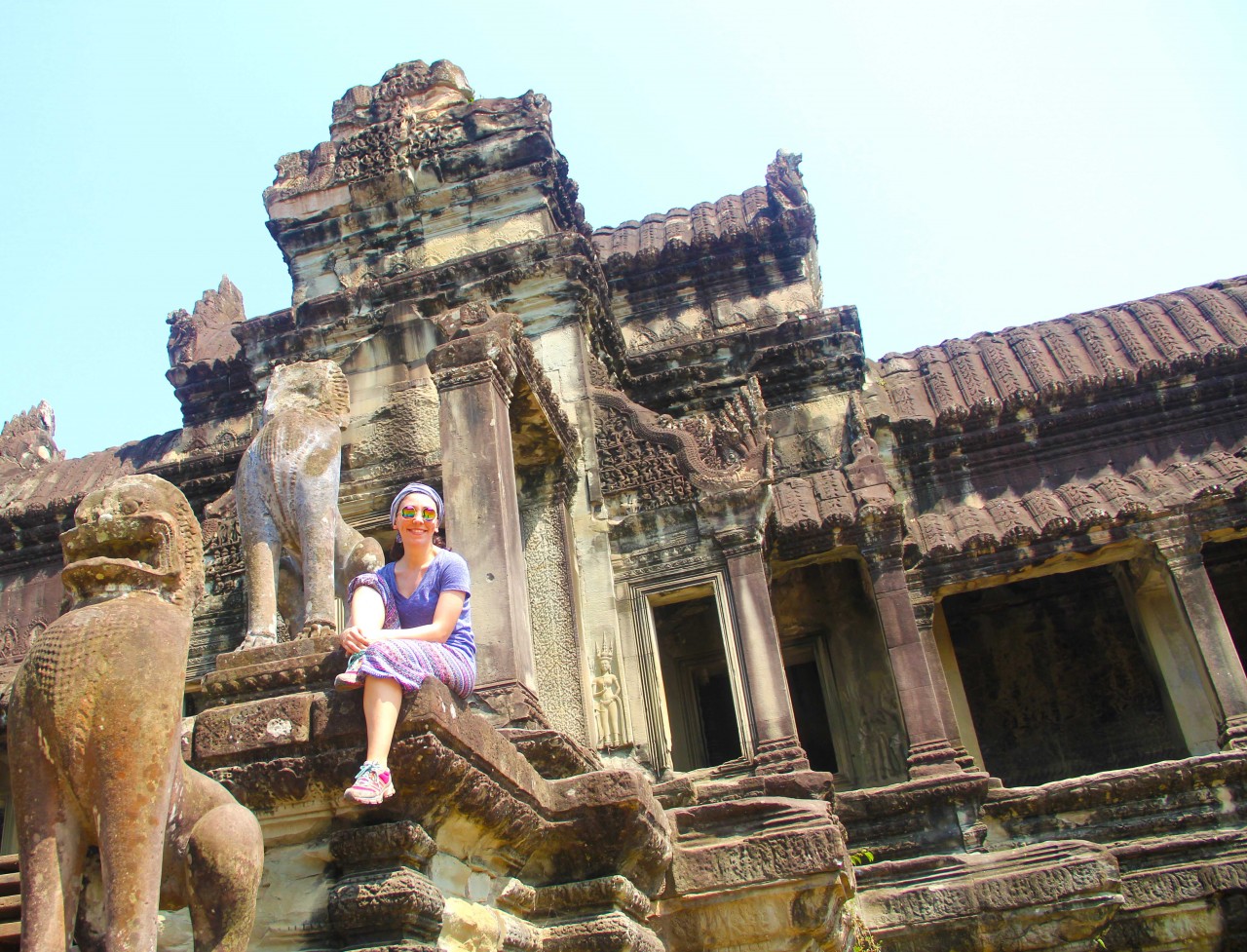 I found myself in a hallway where all the struggles, wars and fights were depicted on the walls of Angkor Wat… I was going through the stories of 7th Wonder of the World…wauw 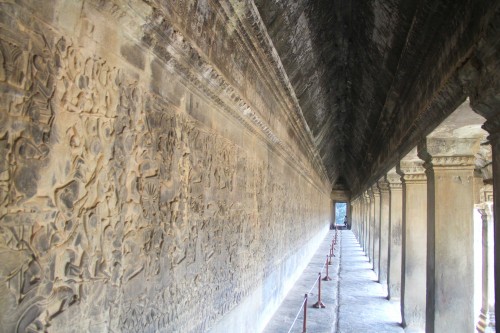 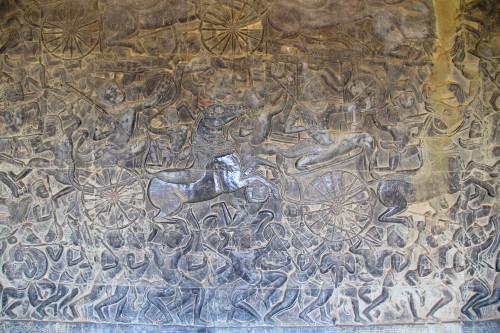 How was Angkor Wat built?

On the otherside of the hallway, here is what welcomes you.. 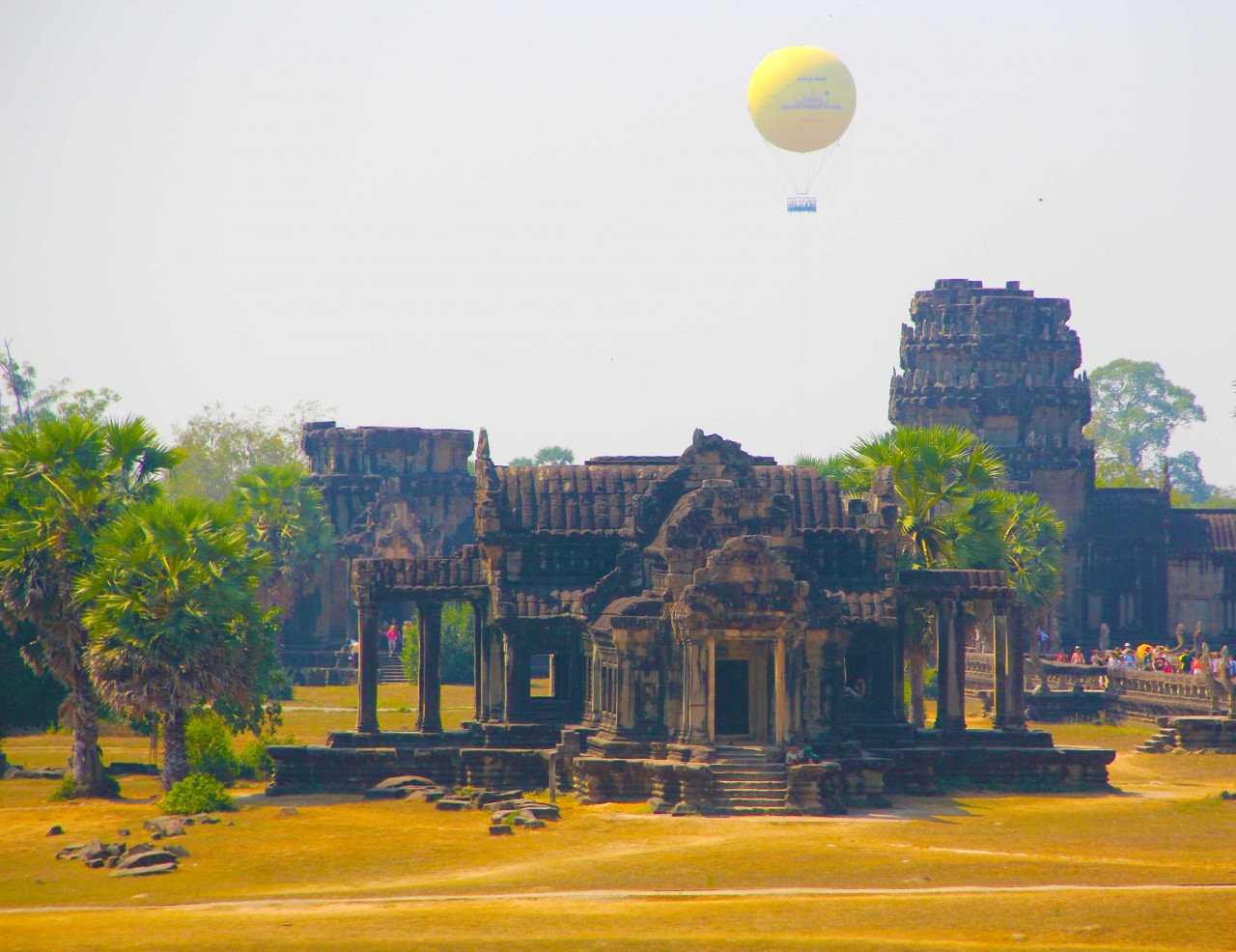 Angkor, is not Angkor Wat. Angkor is the name of the city which means “Capital City”, “Holy City” or “City of Temples”. Angkor Wat is the biggest temple in the city. 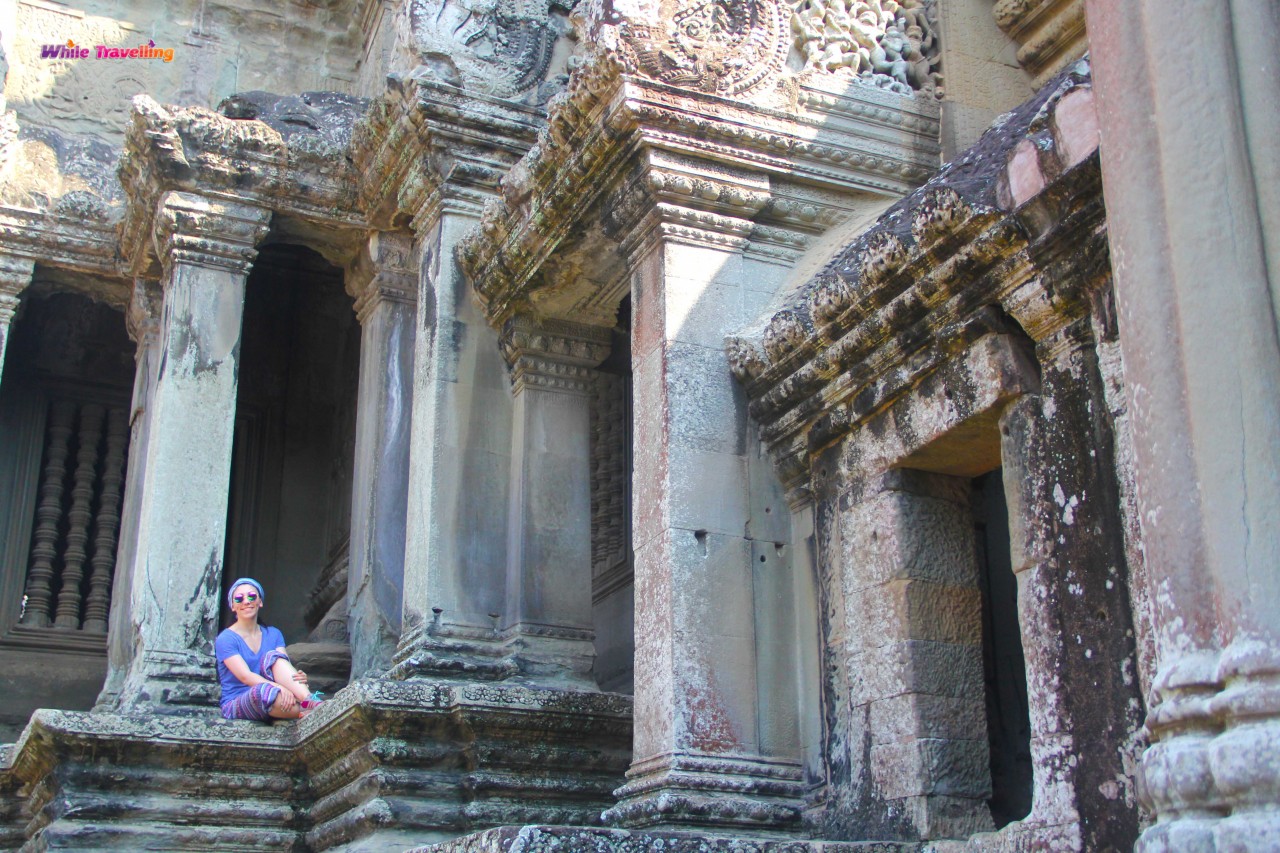 Time to climb up again… 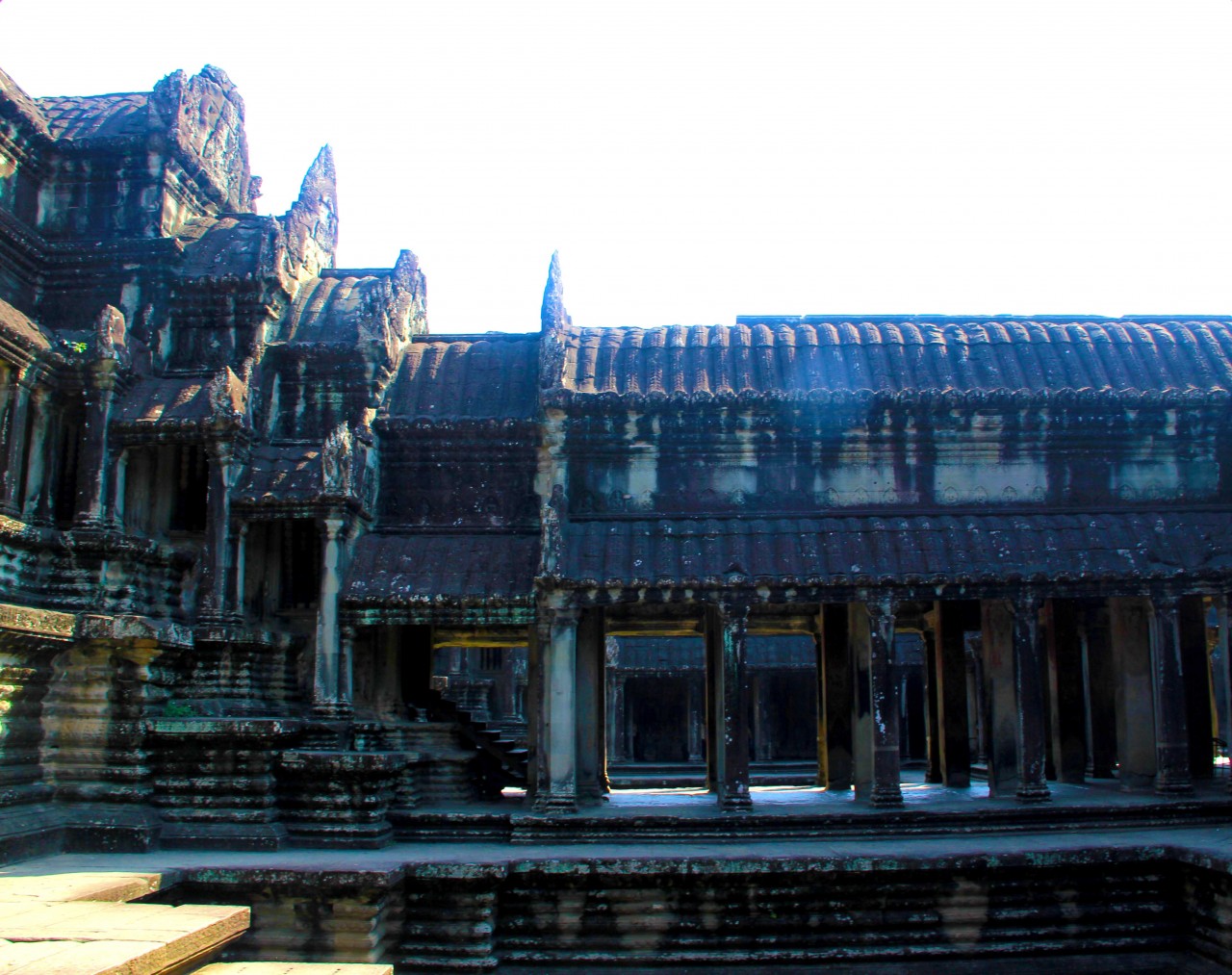 I like to look at things with a different angle haha, here I am jumping off the fences,  it was great to separate myself from the crowd at some point at least for a short limited of time till the secuity guide came and picked me up hahaha. 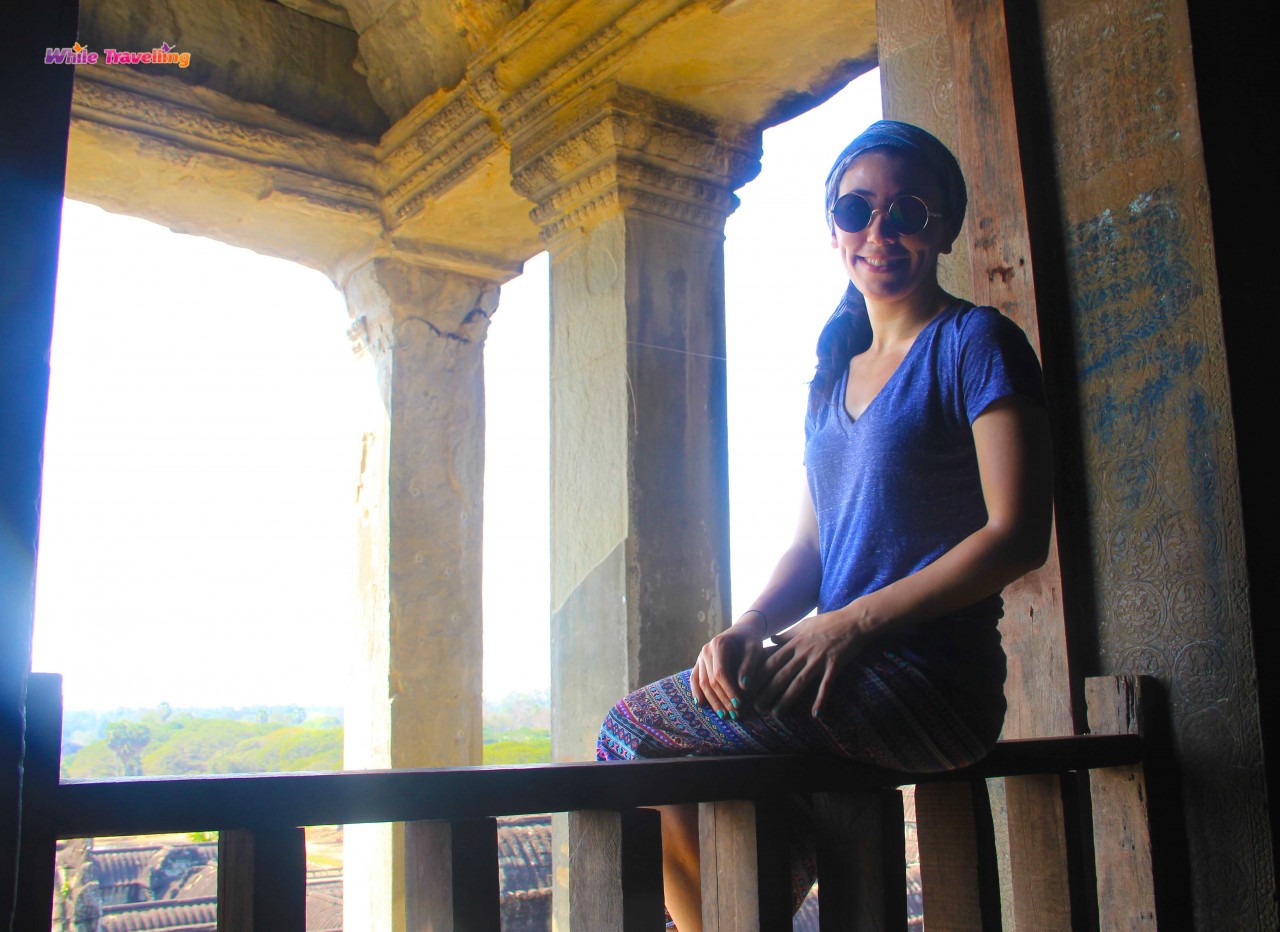 But did you know what I’ve seen different than the others? Here we go… 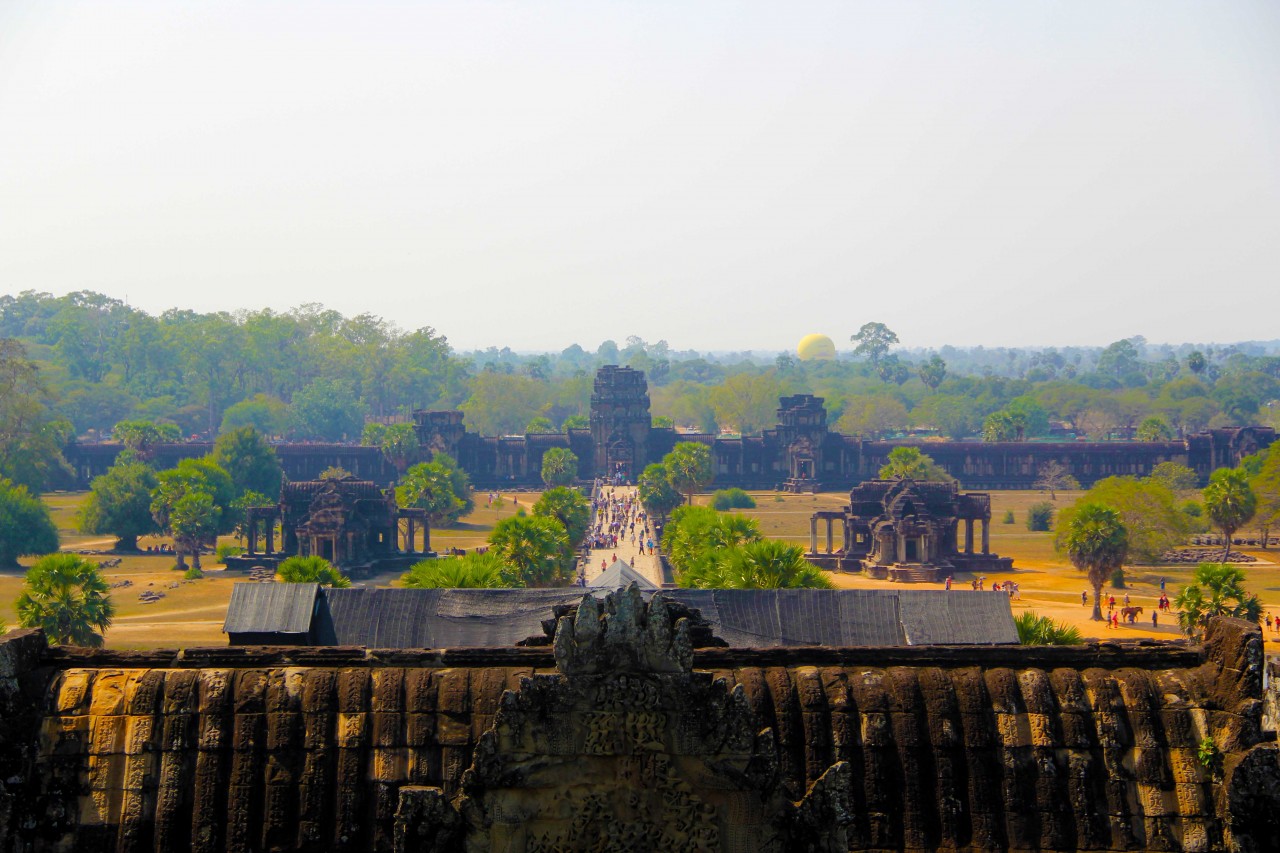 Angkor Wat is spread on a 200 hectares, a rectangle of 1.5km East to West and 1.3km North to East. Literally one of the biggest religious monuments in South East Asia… 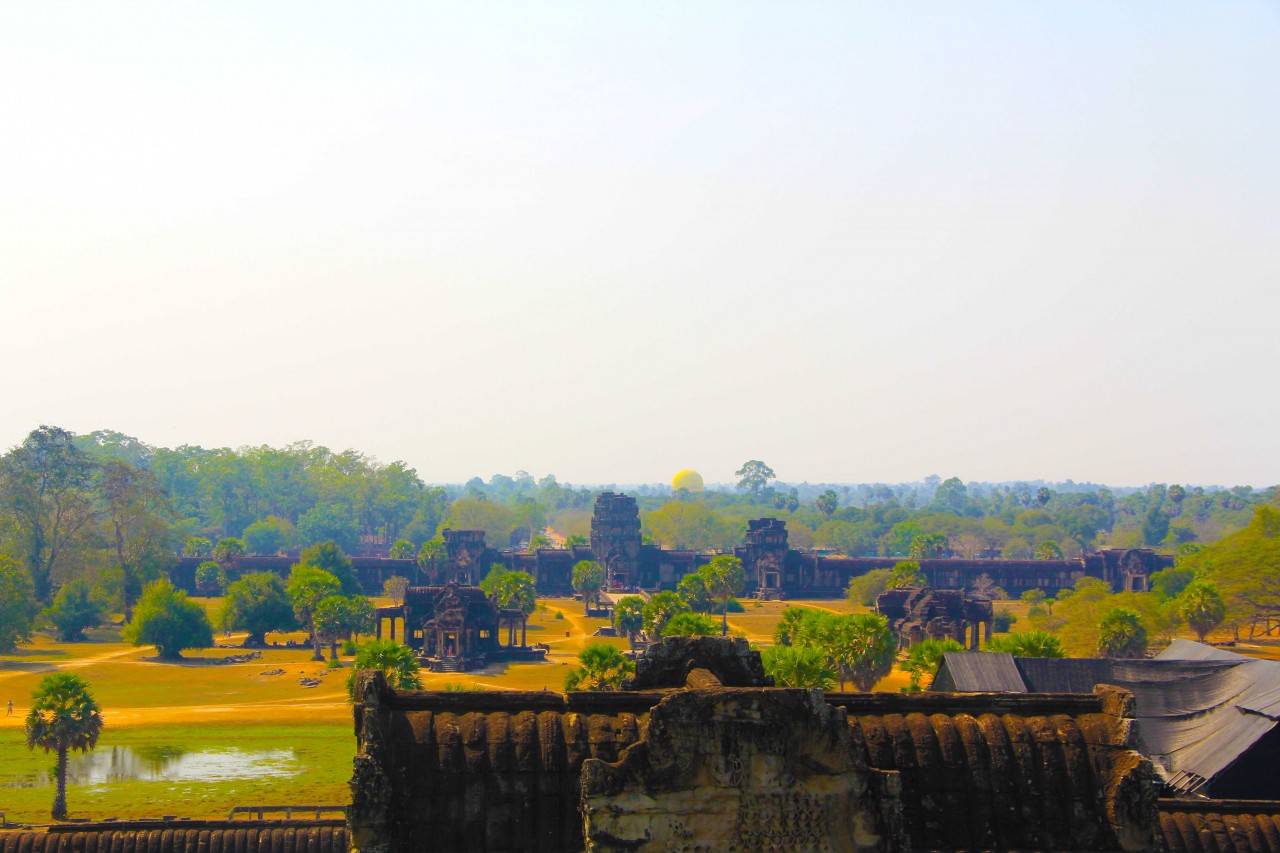 This is the opposite side of Angkor Wat…I saw the less travelled side road down there and I put it in my mind to go and take some pictures there but I will tell you what happened on that road in the next article haha, it was hilarious, I am telling you but I wouldn’t do it again, well uhmm kind of haha 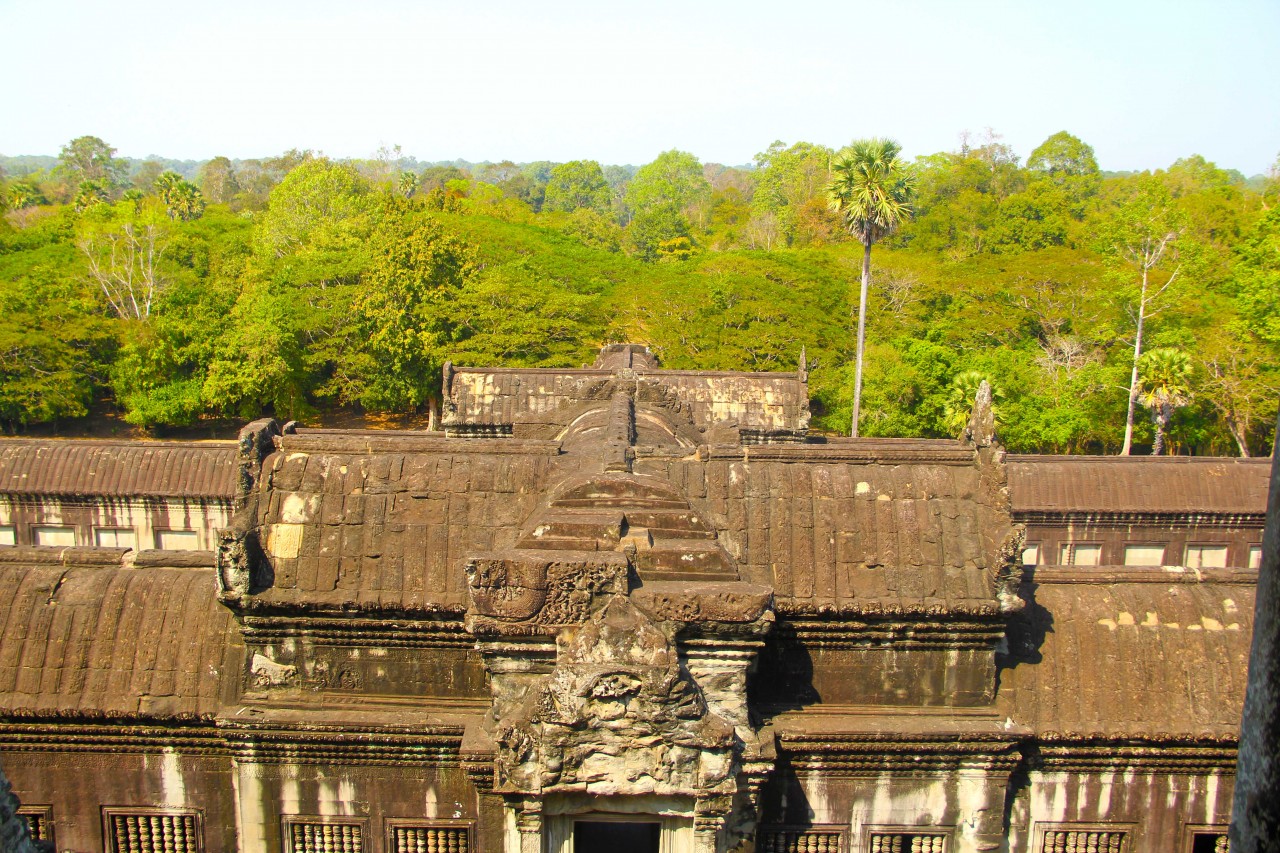 Angkor Wat consists of 7 structures, the Causeway, Moat, Outer Wall, Avenue, Central Complex, Upper Level and Towers. Look we’re flying hahaha..When it comes to the towers of Angkor Wat…Rising 31m above the third layer and 55m above the ground is the central tower. 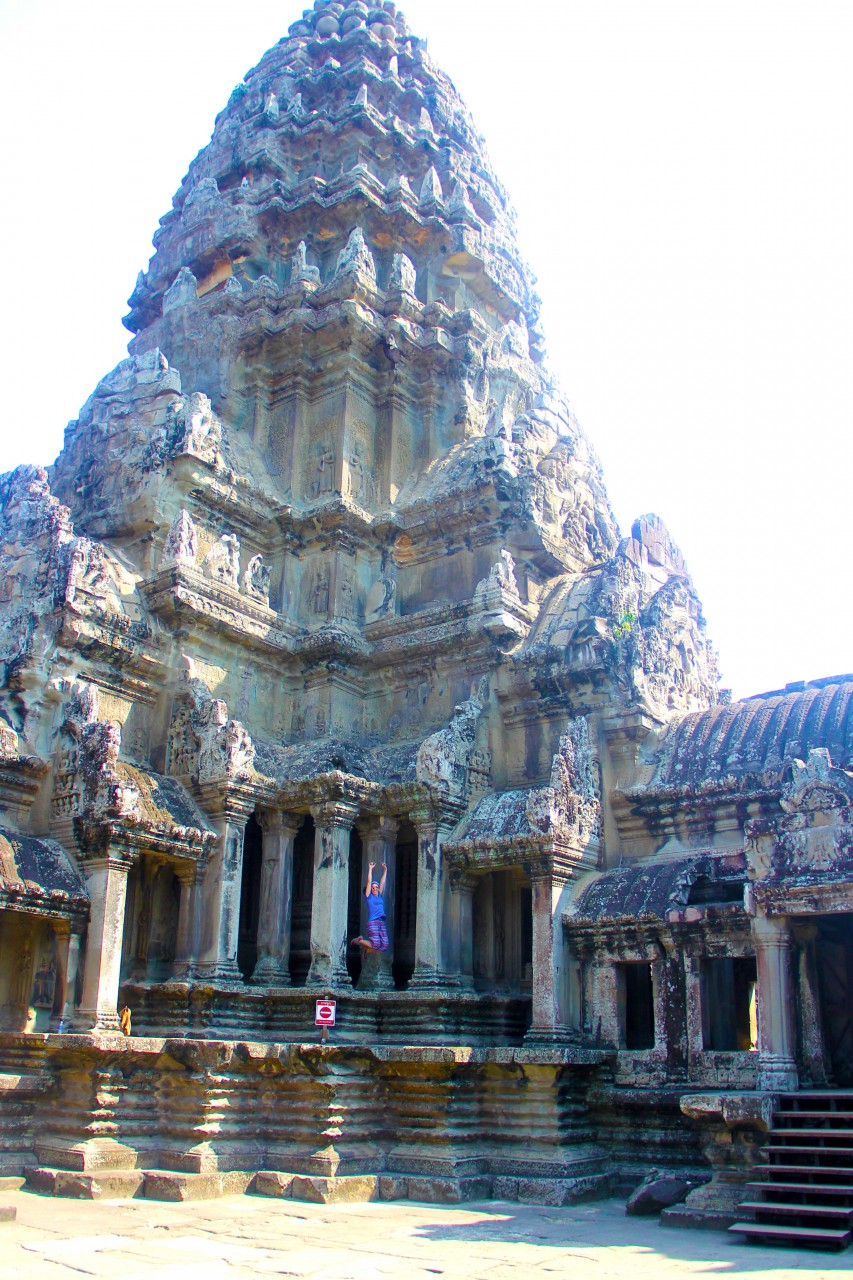 The Statue of Vishnu

When it comes to statues, the best known one is under the Southern tower, there is a 3.25 meter tall statue of Vishnu, known as Ta Reach, accepted as the represantation of “the king of the ancestor and spirits”, and the supreme God of Vaishnavite tradition in Hinduism.

When Angkor Wat became a Buddhist temple, the head of Vishnu was replaced with the head of Buddha. Vishnu’s eight arms are seen holding a mace, a spear, a disc, a conch and various items. There are offerings both from young people preparing to get married and from pilgrims giving thanks for their good fortune.

Other statues of Buddha placed in Angkor Wat along with its rich artwork. 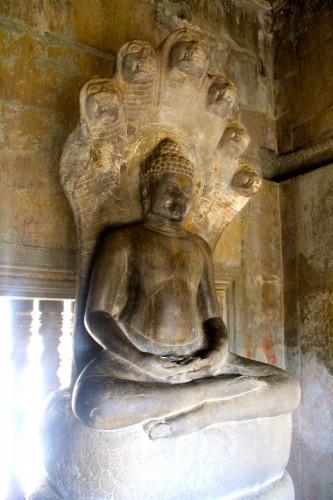 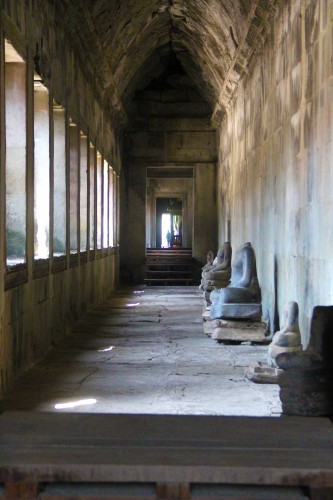 As we mentioned the art work, here are the beautifully carved ones… 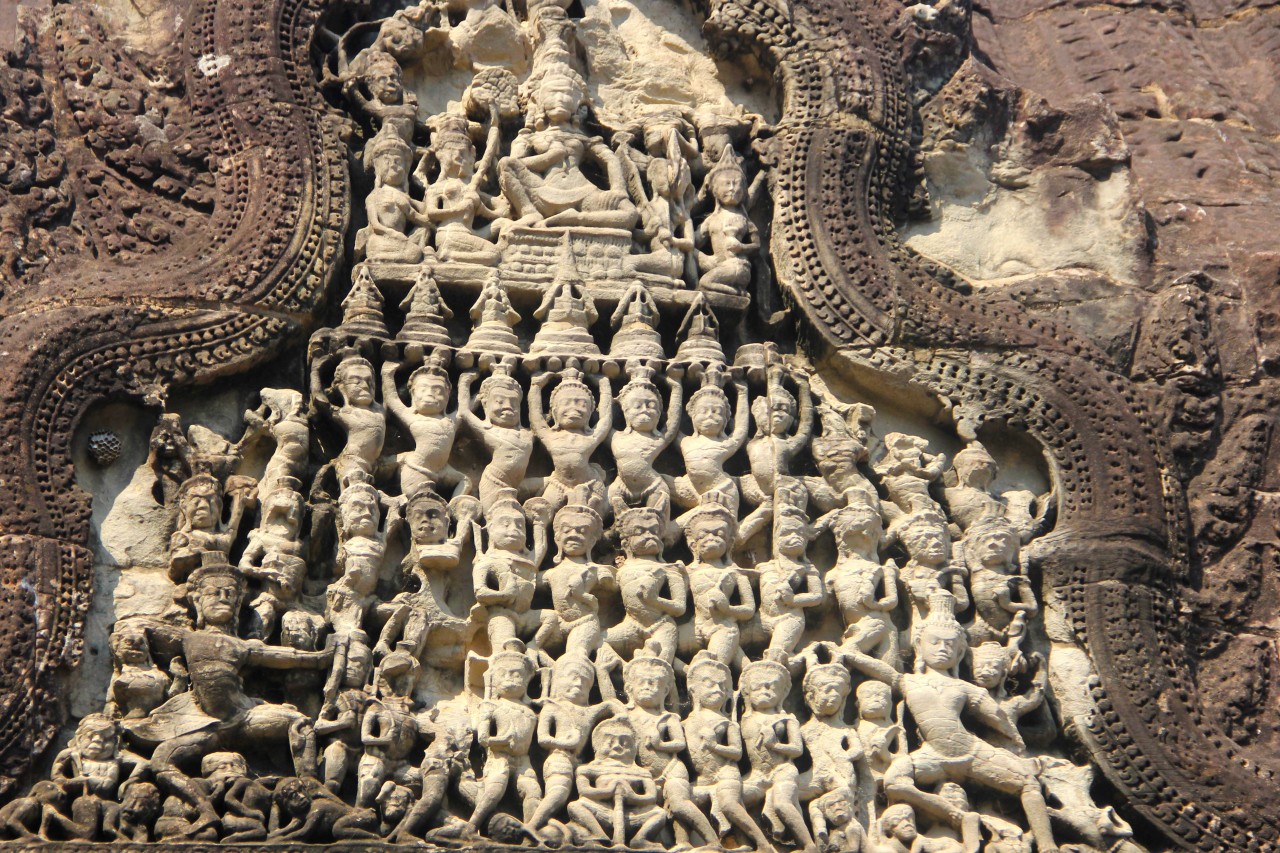 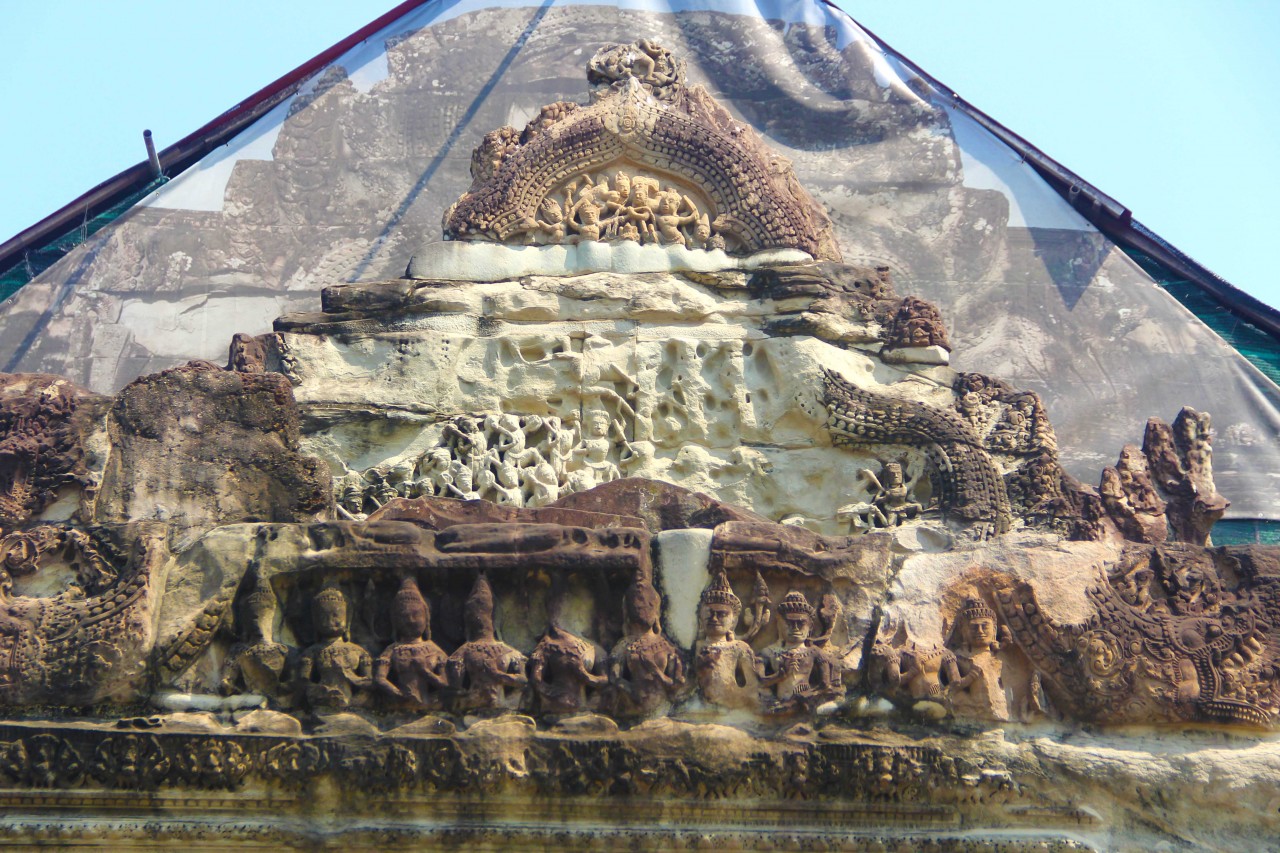 Angkor Wat is famous for its heavenly nymphs, apsaras, carved into the walls. Did you know that they have 37 different hairstyles for the heavenly nymphs? I counted 30 of it while exploring haha. 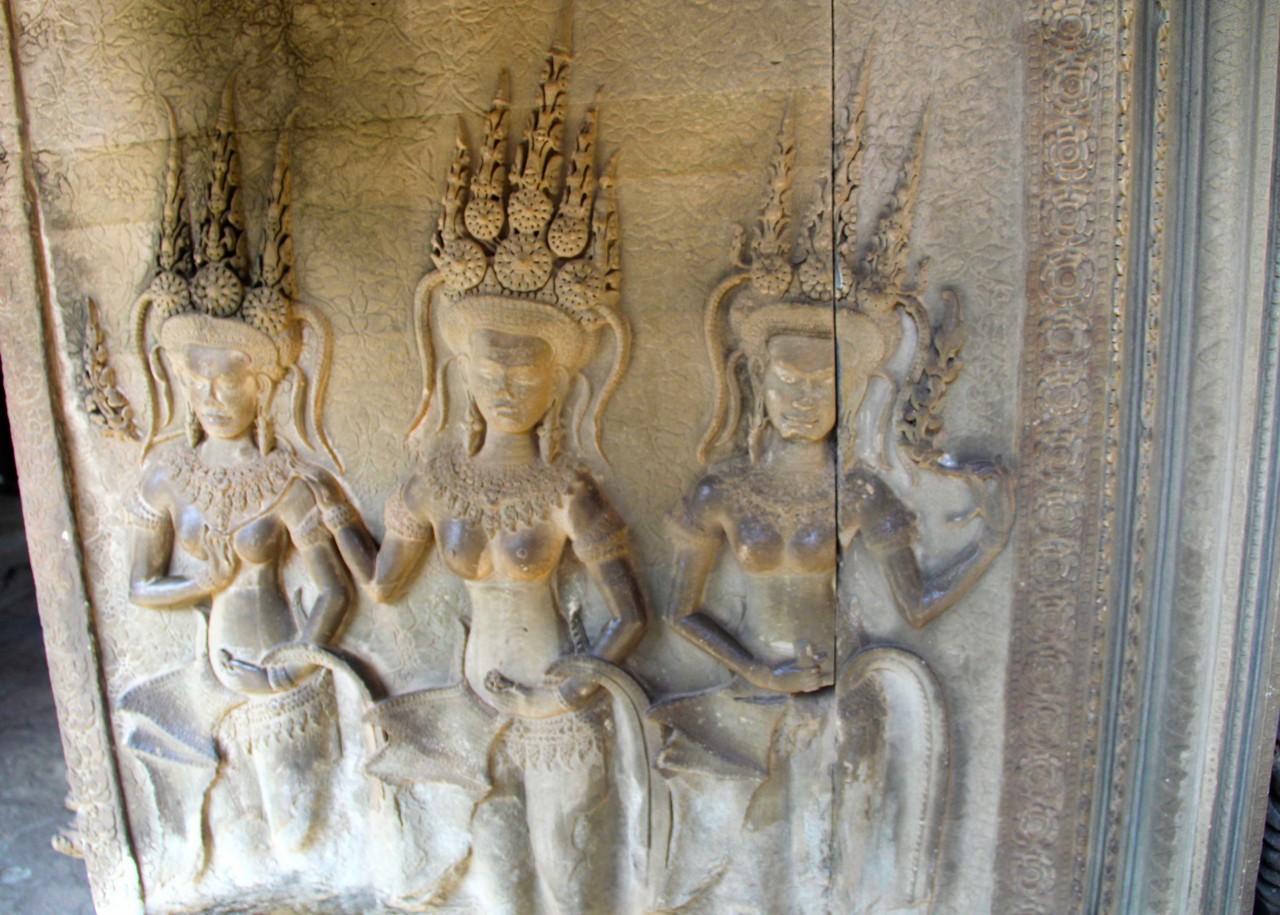 The sun is calling everyone to take their seats to watch its magnificent lights on Angkor Wat as the sun goes down. 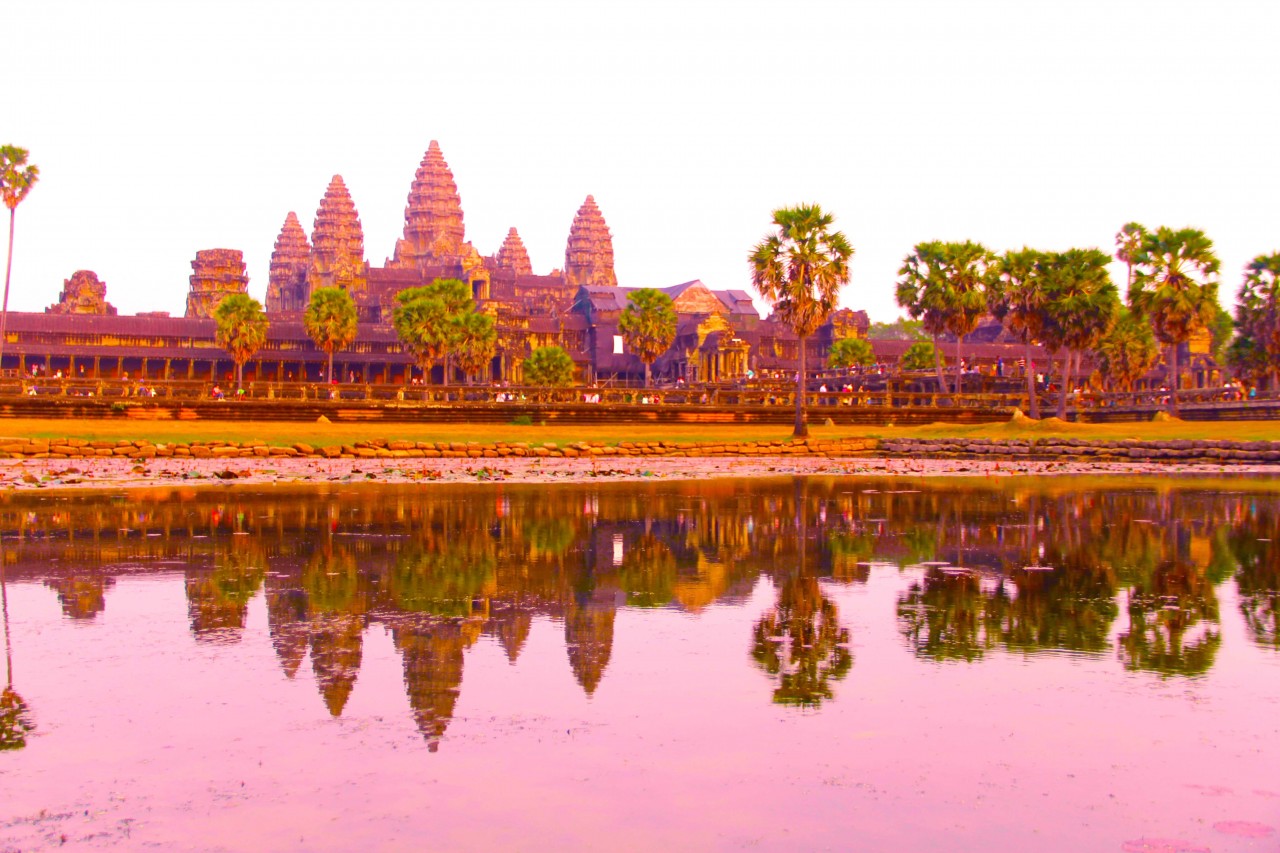 Don’t miss the sun rise in Angkor Wat, we’ll be writing more about the sunset at Angkor Wat, the faces of Angkor Wat and many more.

For more pictures, find us on instagram. Let us know what you thought about your trip to Angkor Wat by drop us a comment here…

See you in the next article.

Where ever I go, there are 2 things that I won't skip: Watching the sunrise and sunset...After I found a hotel in Siem Reap,...