Yangshuo is full of the cuttest hills on earth, with its unique nature, Yangshuo is an hour drive away from Guilin and formed on Li River.  After I finished recording my first Online Economics Course , I wanted to give myself a “well done” gift and decided to go to yangshuo before my Turkey trip. I bought my flight ticket and head to the airport with only a small backpack. I was introduced a local guide on wechat so he helped me with the transportation ararrangements from the airport to my hostel.

For more pictures, videos, experiences and live stories follow me on my social media channels to get the best out of it and be inspired.

How to go to Yangshuo from Shanghai?

You can fly directly to Guilin from Shanghai with local airlines, I used Spring Airlines. It is a 2,5-3 hour flight.  Afterwards there is a 1,5-2 hours bus/car/taxi ride to arrive Yangshuo. 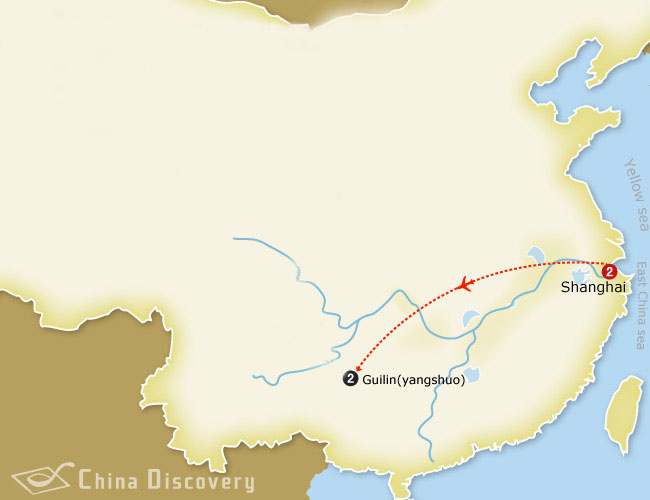 As soon as I arrived Guilin Airport, I headed straight to the airport as I had only one small backpack. The local guide arranegd a driver to pick me up from Guilin Airport to drop me at my hostel. That was a big time saver. We were gonna pass Guilin, downtown of Yangshuo to go to my hostel in a nearby town to Yanghuo.

Along the way, I saw the brightest and the hugest stars I’d ever seen in my life. The road was pitch dark and stars were shining at their brightest and thanks to them I could see the shape of the hills thanks.   I was already excited to see the view in the morning. After 2 hours of drive, we arrived my hostel and I paid 200 RMB to the driver.

Where did I stay?

I stayed at Wada Hostel, outside of Yangshuo. Flight followed by a road trip for 2 hours left me so tired. While I was trying to get off the car, a lady from the hostel welcomed me outside and helped me to check in. She took me to the dorm where 10 people staying. When she opened the door, I was amazed. It was the biggest dorm I’d ever seen and also the biggest bunks as well. The beds were wide and long more than I needed so that was a huge relief. I was so happy as staying in a dorm with 10 people is absolutely diffeerent than staying with 4-6 people. With the comfortable beds and having curtains around my bed, 2 lockers, one very big and one small above my bed made a big difference and I didn’t feel l’ke I stayed wit a lot of people.  I put my stuf to the lockers and as I was goign outside to wtch the stars, the lady asked me if I wanted to eat anything, although the kitchen was closed but she said she wanted to cook as I looked ulta-tried, yeah I was. That was an amazing gesture. I wanna thank her again from here.

After feeling full and happy, I went outside to watch the stars and I literally spent 2 hours standing outside, staring at the stars and trying to take a picture. You see those cute hills, those were formed after India merge with Asia continent and also due to the moonson climate. 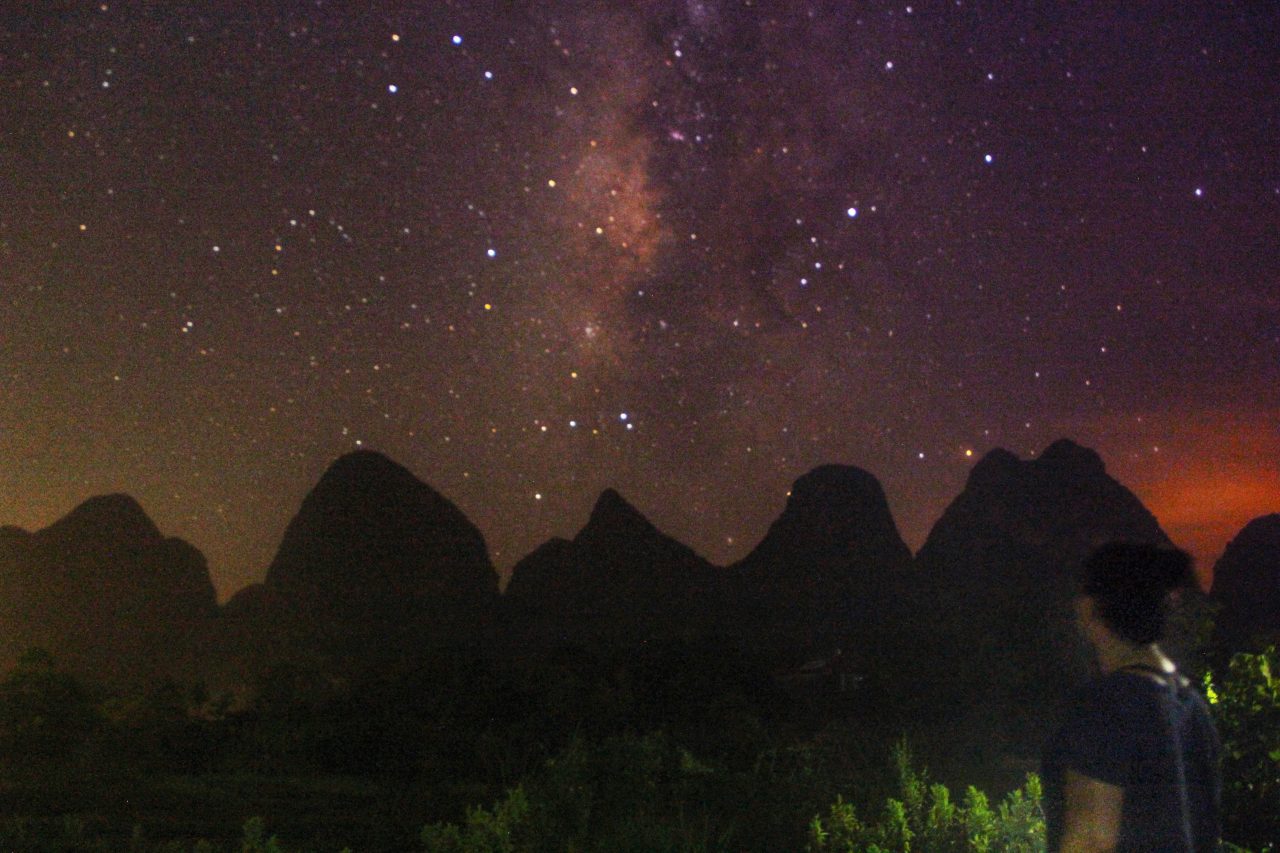 Don’t stay in Guilin is you have limited time for this trip and also don’t stay in downtown Yangshuo if you wanna be in nature. Pick a hostel/hotel outside of Yanghuo where you can rent a bike or scooter and go around easily whether it is nearby hills or downtown Yanghsuo, especially avoid staying in West Road. It is extremely noisy till late at night and there is always traffic jam where people use their honks as much as they want and as loud as they want.   That’s why when you stay in a nearby village, you can spend time ‘n nature as much as you want.

You can find the view of the hostel and its picture below.  I was super happy throughout my stay in Wada Hostel  outside Yangshuo.  Clean rooms, delicious food, English speaking and friendly staff. There were small spiders in the bathrooms but remember you’re in the middle of the nature so that’s normal. I hight recommend this place for nature lovers who wanna pay as less as possible like 60 RMB for a night. 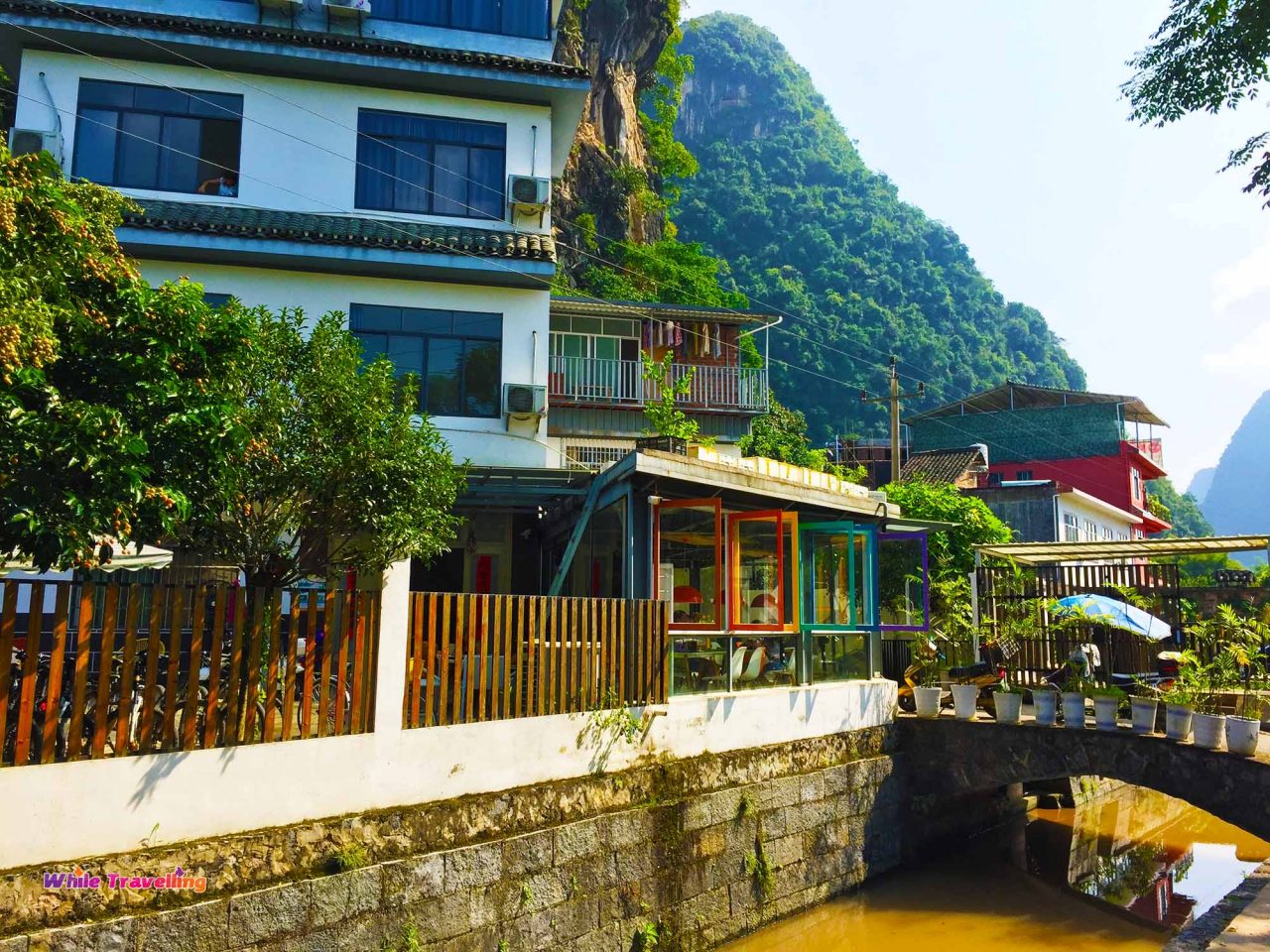 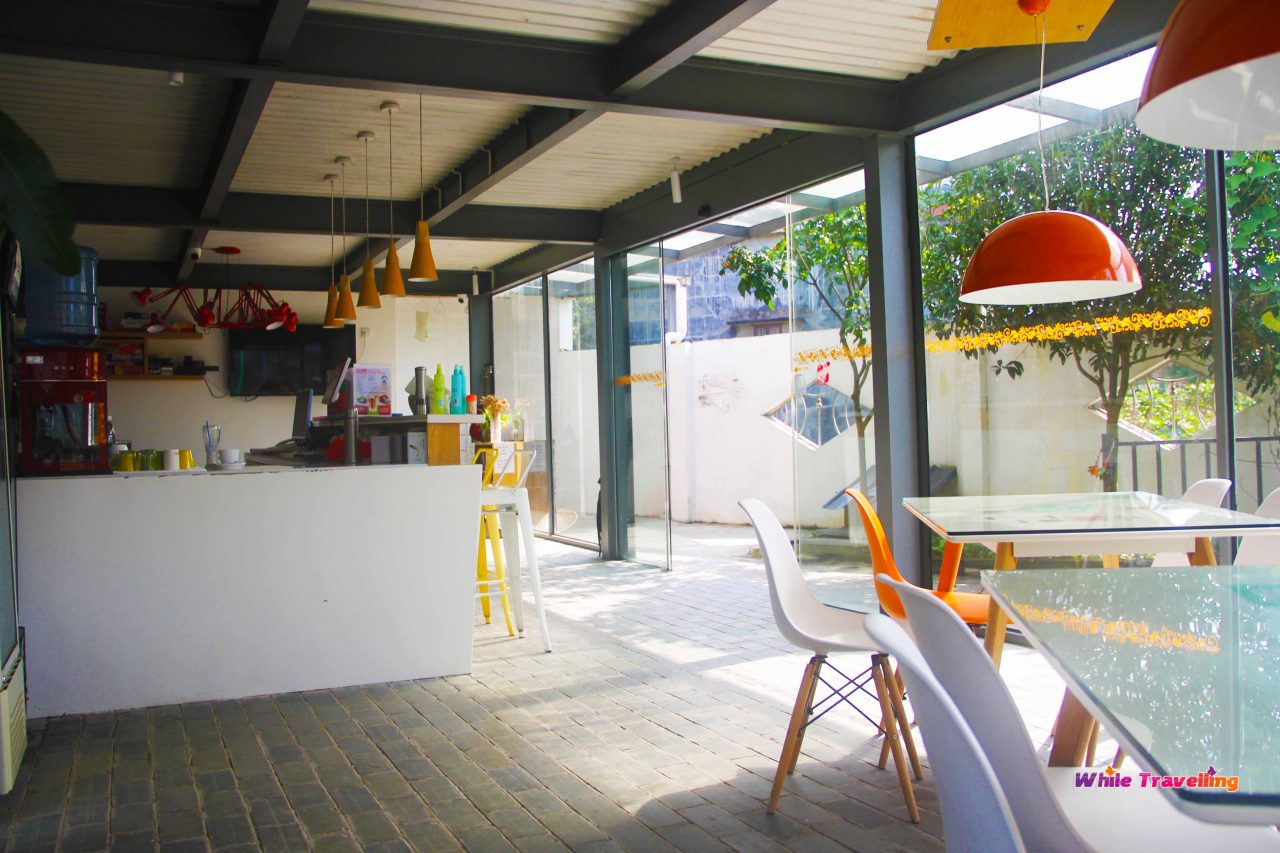 And this is the vide that welcomes you when you look out of the window from Wada Hostel. You can rent a bike or a scooter and go around with your own pace, walk around the villages and see the daily life of local people here and you can ride to the downtown in a short amount of time. This about what it would be like to wake up to this view? Let me tell you, it is fantastic and you should experience it too. Again, this is not a paid post, I was extremely happy with my stay and the surrounding nature here. 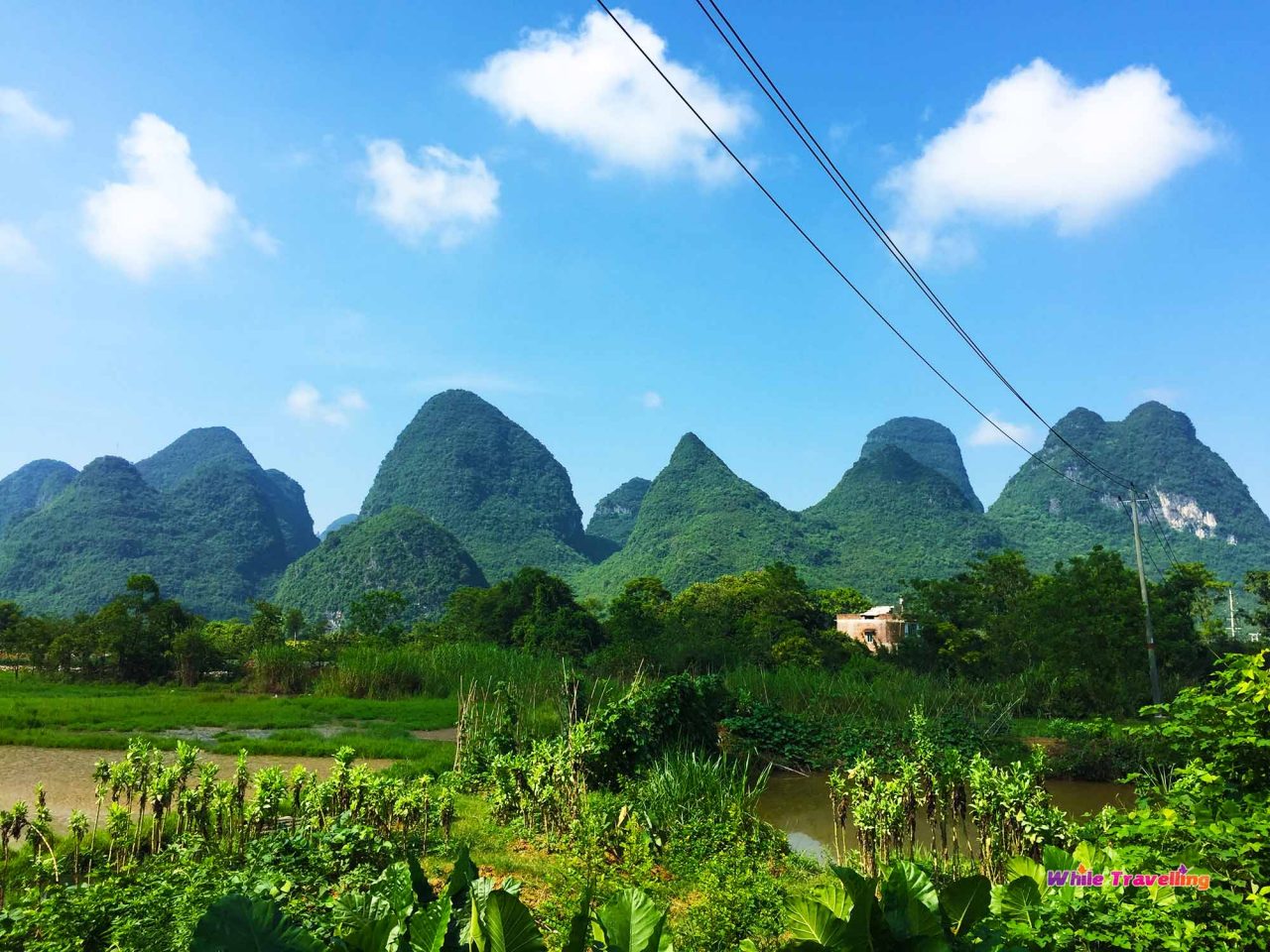 When should you visit here?

If you come around Summer, it is gonna be hot and humid and it comes with a lot of mosquitos but then you don’t have to deal with the crowds so that’s an upper hand. Come around April, May or June, it will rain a bit but that’s better than extreme humidity. Remember, if you come around October first week, it is the National Holiday of China and millions will travel the same week so watch out the crowd:)

When I was climbing these cute hills, it almost felt like I was climbing a mountain thanks to the humidity. Even my eyelashes were wet and water was dropping. Everytime I climb up and down a hill, I had to change my t-shirt and also drank 1,5 litres of water each time. It is a great exercise, but pay close attention if you have heart problems or high blood pressure. 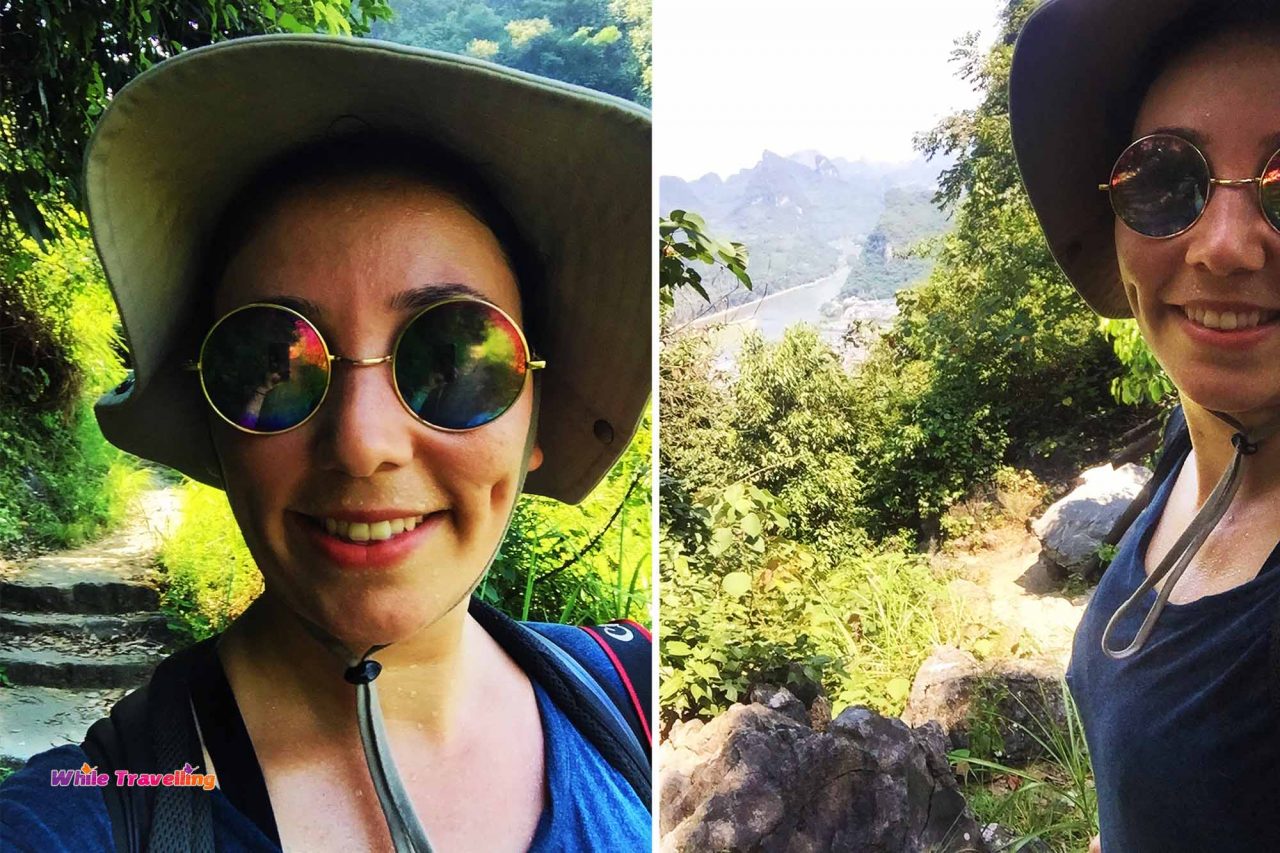 My local guide arrived my hostel early in the morning. And another thing that you might be asking is ” Do we need a guide to explore Yangshuo?”. Absolutely not, I just wanted to feel more confortable whiile taking pictures and also help the local economy a bit. I paid him 250 rmb for a tour till 3pm for the first day and the rest of the days I was by myself or with the friends i met at the hostel.

1-) Explore nearby villages and towns

Starting from Wada Hostel, we visited the nearby villages and towns. 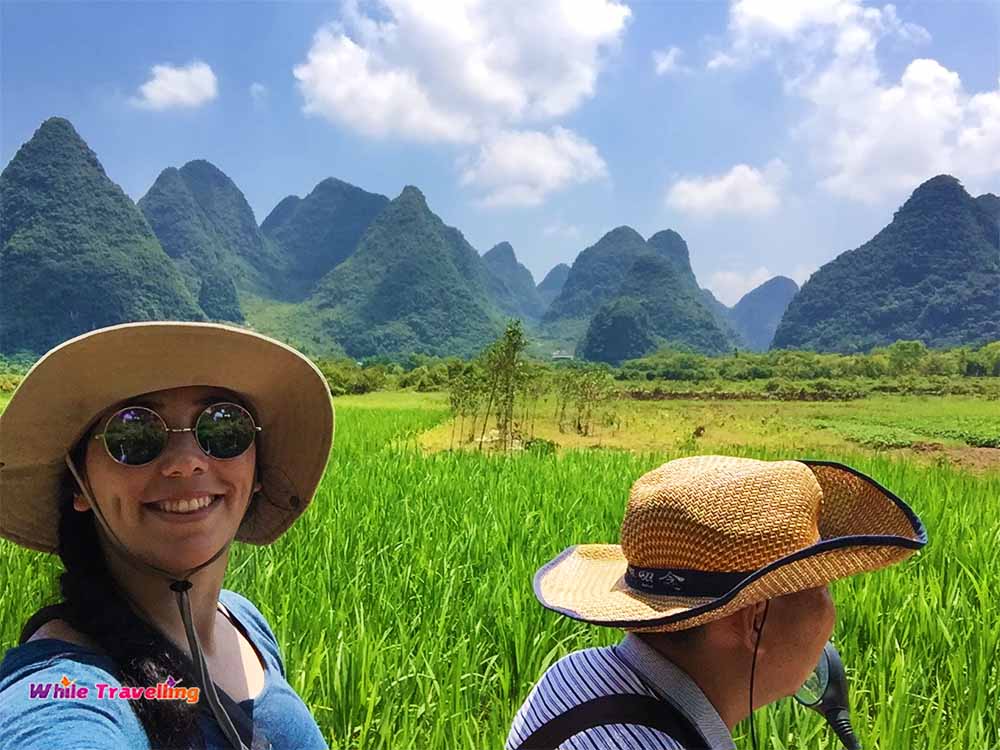 I fell in love with the tone of the green I saw here.

Yanghuo’s economy is dependent on the primary sector, especially farming. During summer time to time it has to face with floods and typhoons. the local people living here are used to the climate of course, after each flood or typhoon they pick themselves up\ clean their homes and lands and keep working. 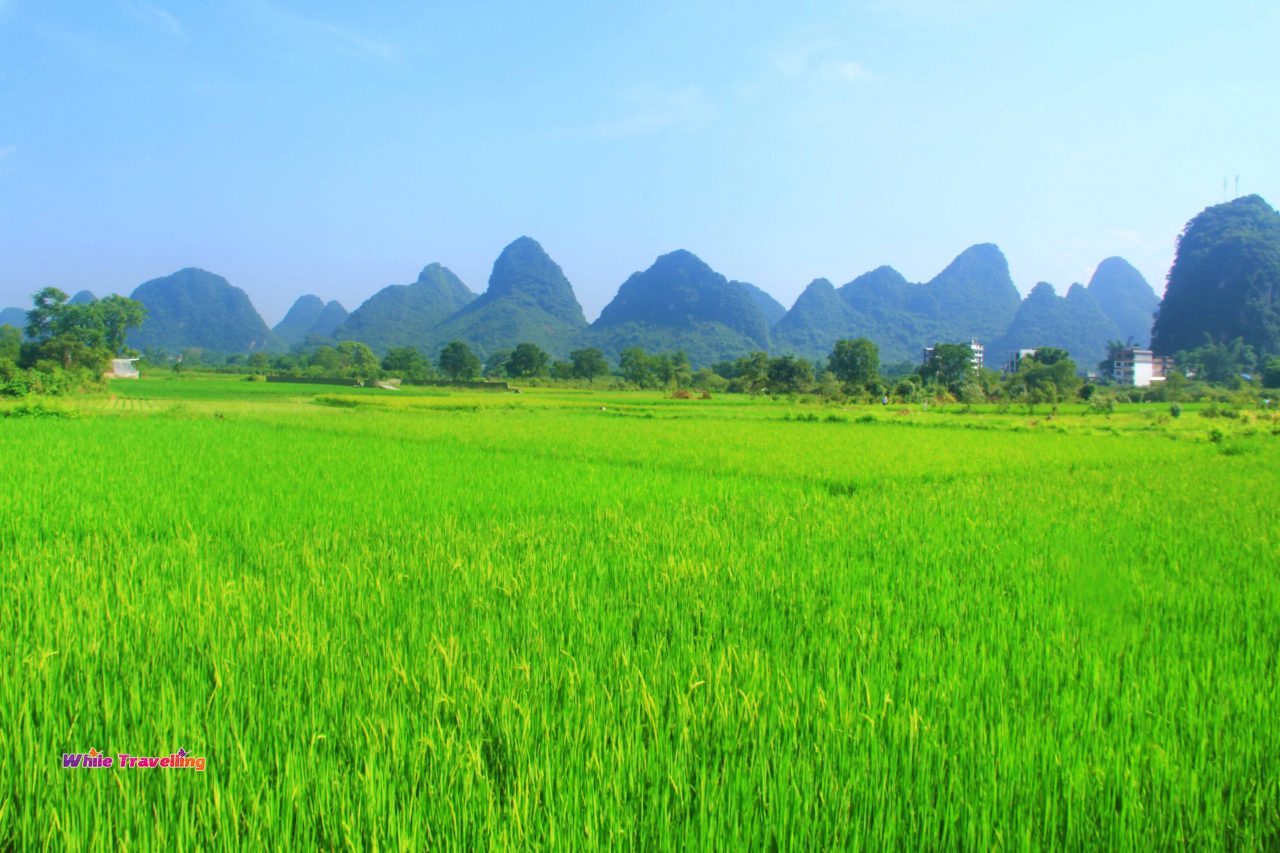 The color of the river is always brown but when I visited it was extra brown because of the floods. There were also some signs placed  in some areas saying swimming is forbidden. 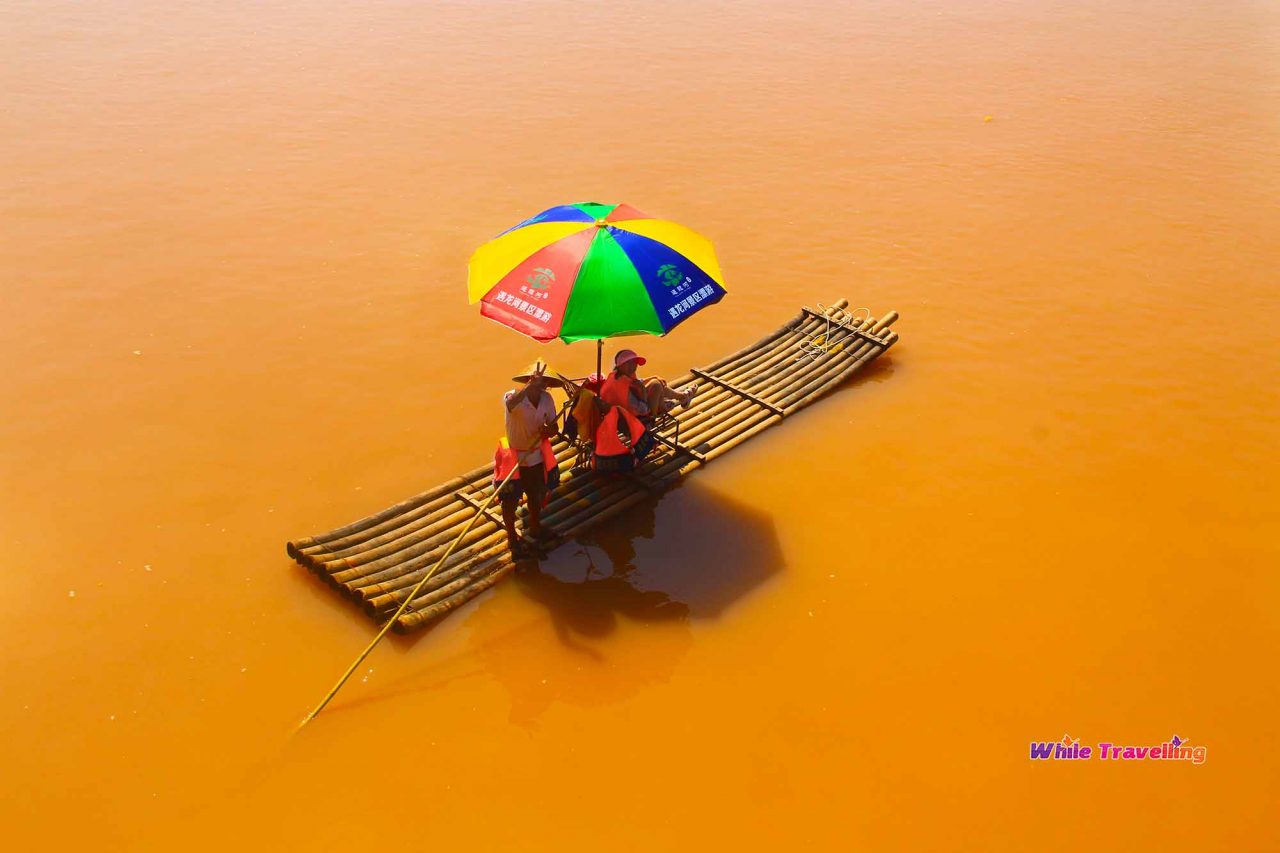 As you can see, bamboo rafting is different than the normal rafting. Here you sit on a chair and the guy behind does all the heavy work. Your feet can get a lottle wet so make sure you have proper shoes for it. 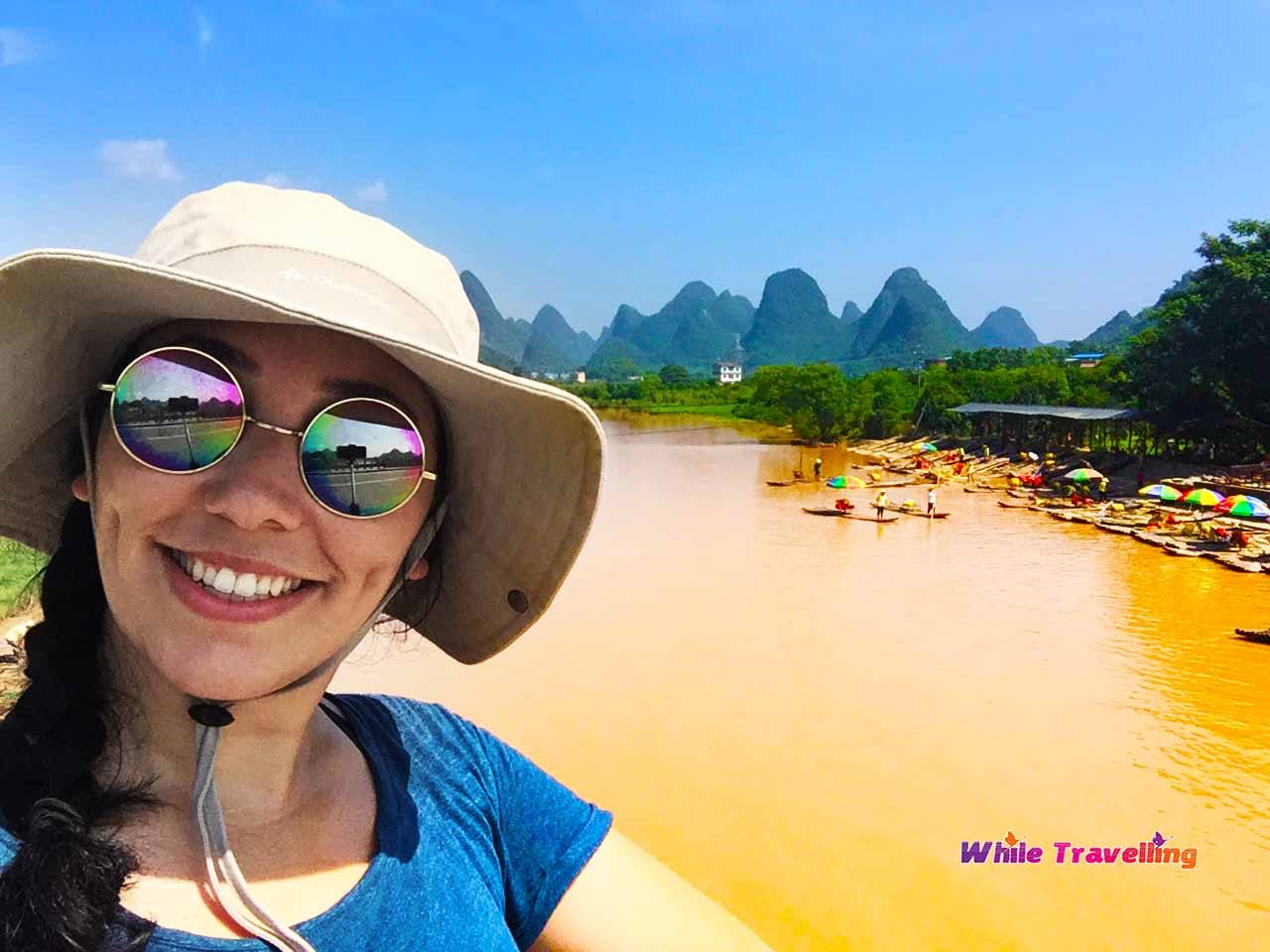 And the bamboo boats are not that light as you might think, it takes group of men to lift a bamboo boat. 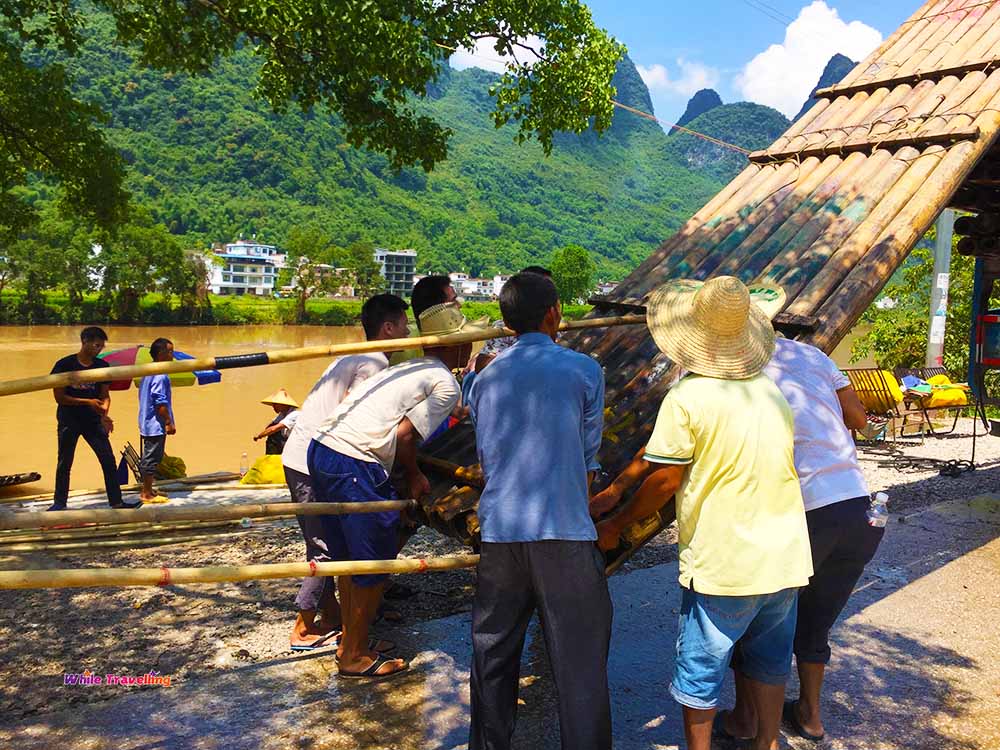 The part of the Yulong River towards the  Yulong bridge looked way better in terms of blue and resfeshing cold water. 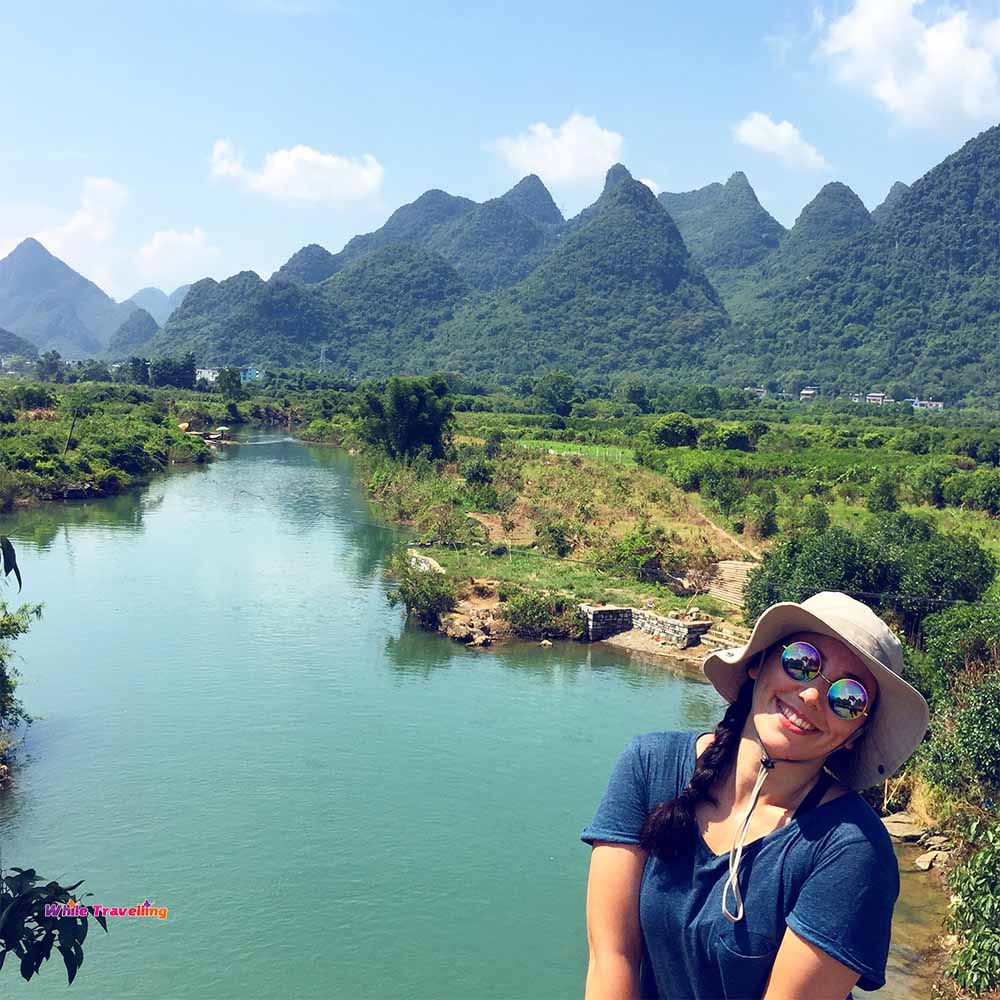 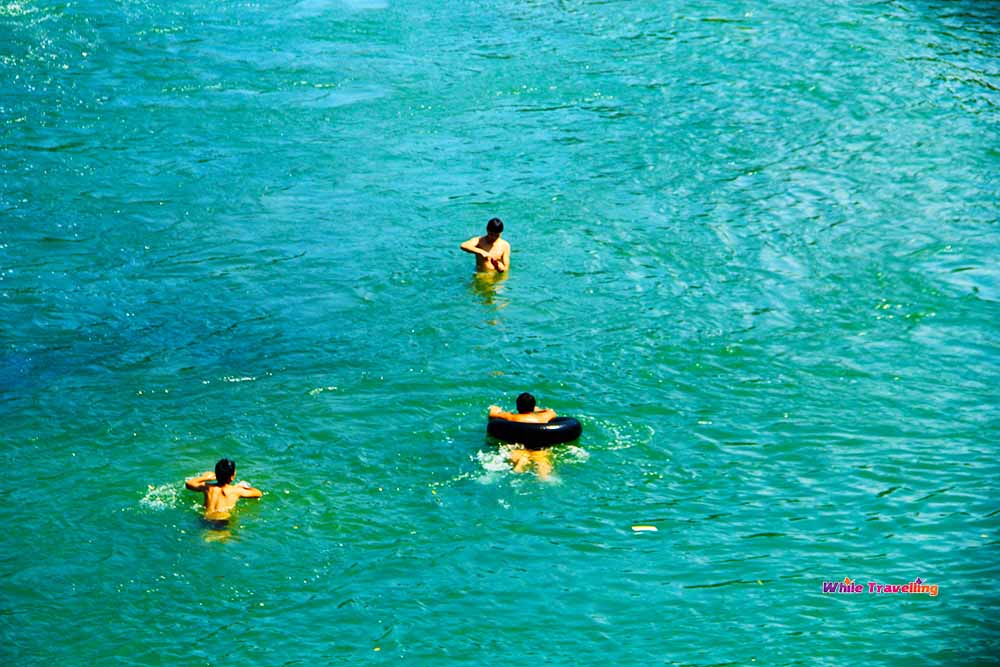 When it gets real hot and humid, some local people come to the riverside to relax in the hammocks after they worked in the rice fields. 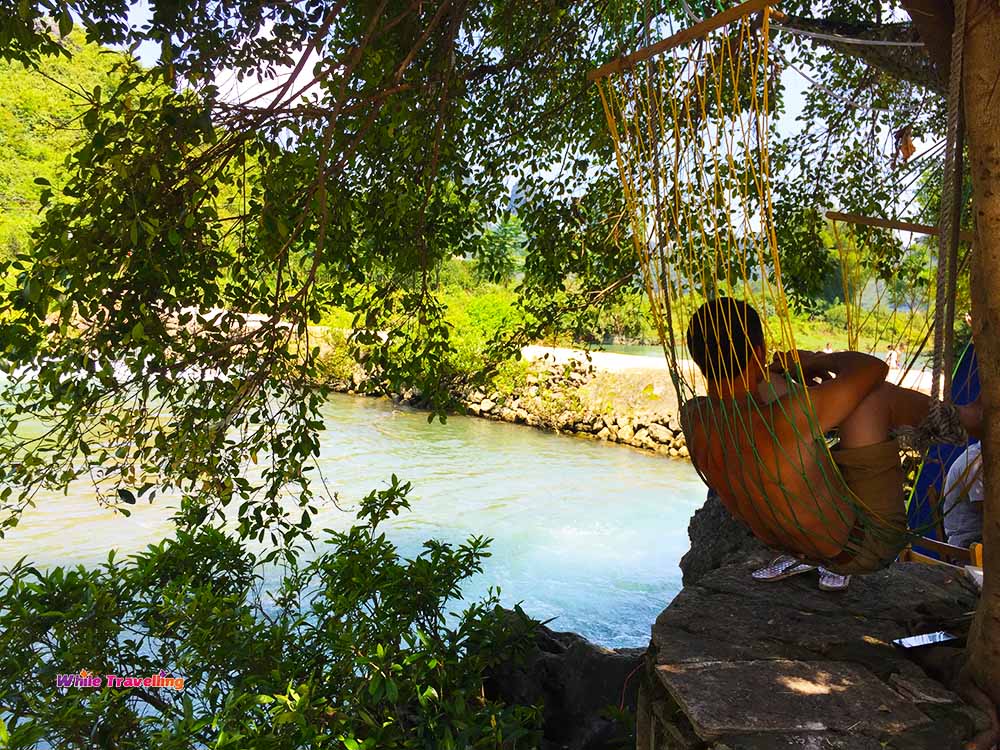 No matter where I go, I always make time to catch the sunset. I was able to catch the sunset twice during my stay in Yangshuo. The first time, I sat down close to the rice fields around my hostel and soon enough I was surrounded with the magical sunset colors and exper’ence the fog and peace surrounding me.

The second time was a bit interesting, especially what happened afterwards. Earlier, I met an Australian woman traveller at the hostel and we rented a scooter and travelled around the city during the day and right before going to the “Impressions Show”, we decided to ride along the river, to catch the best sunset view. We arrived on a bridge and it was just magical as you can see in the video. Afterwards, we had limited time as we had to be in the city center in 15 minutes to catch our shuttle to the show. Well, that was a bit tight so I started to ride my scooter faster but soon it was pitch dark as there were no street lights and the scooter’s light was way too weak and it was only for the short distance. We were lucky cause we would have been crashed by a car, or hit by another scooter or flew over a sand hill. We made it right on time  and got our shuttle to the impressions show which you can find out here in this post too. 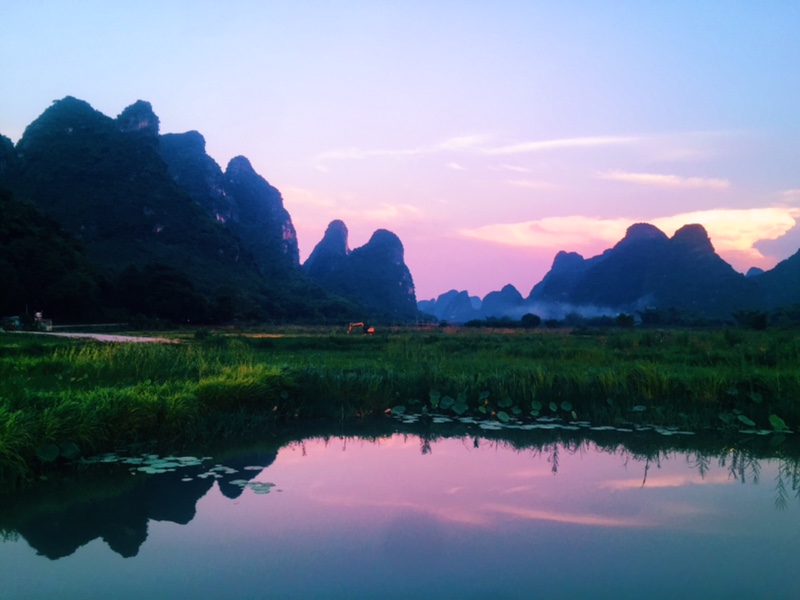 Moon hill is couple of kilometers away from Yanghuo’s downtown.  This is a natural formation but locals believe that the moon went through the hill and caused this moon shaped whole and that’s why it is called Moon Hill. It is said that it takes 20 minutes to creach the top but with the heat and humidity, it takes longer. 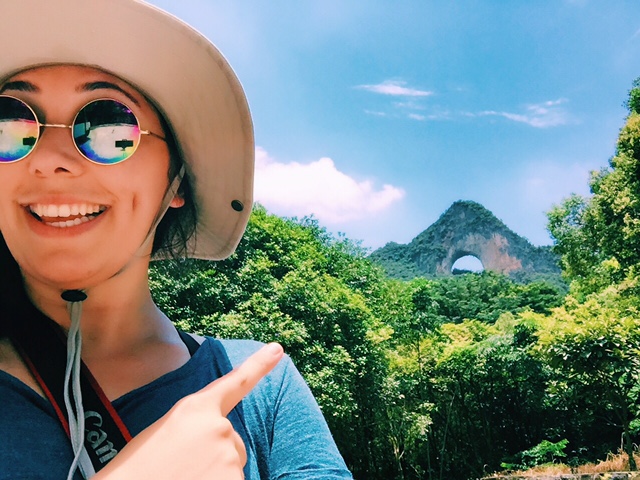 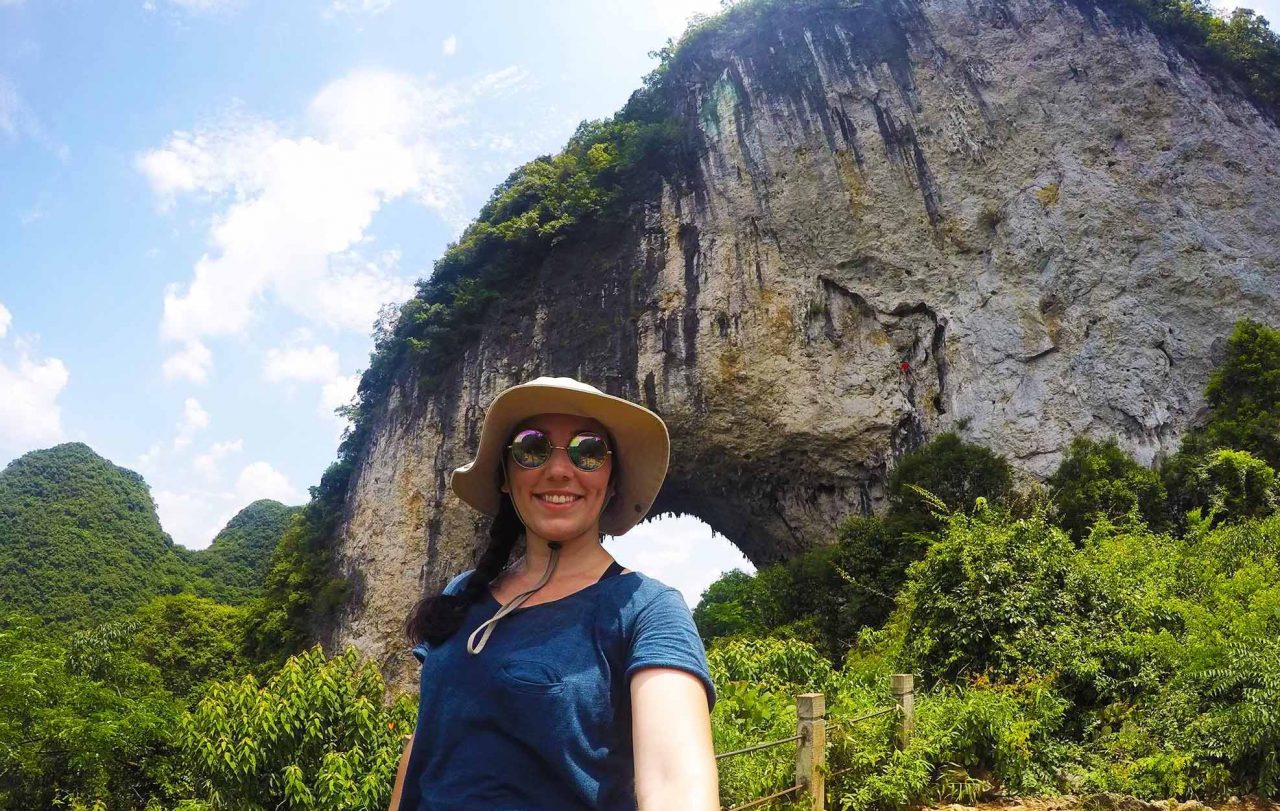 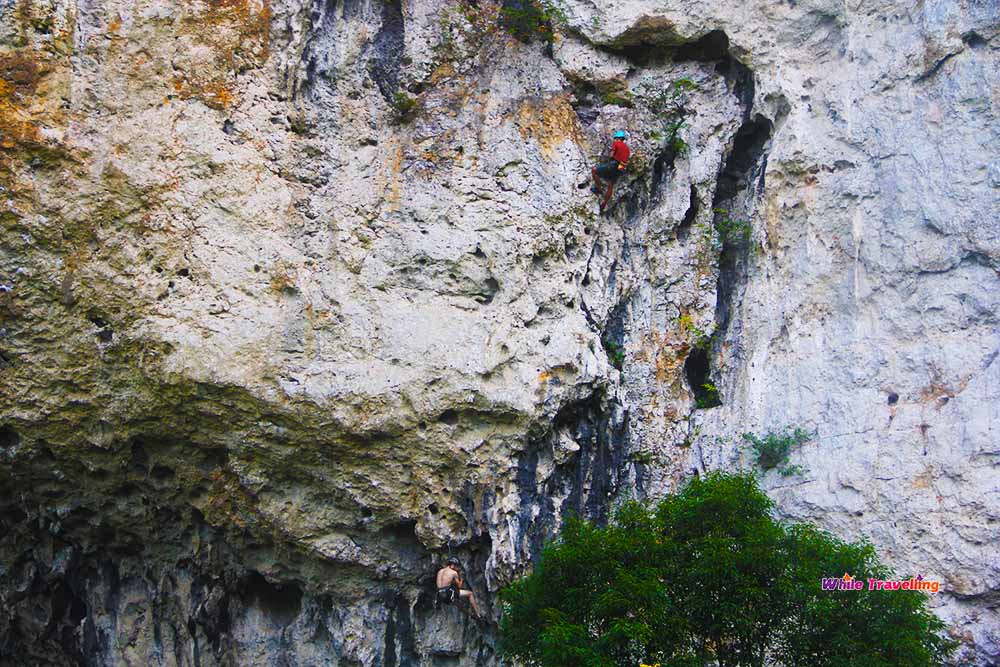 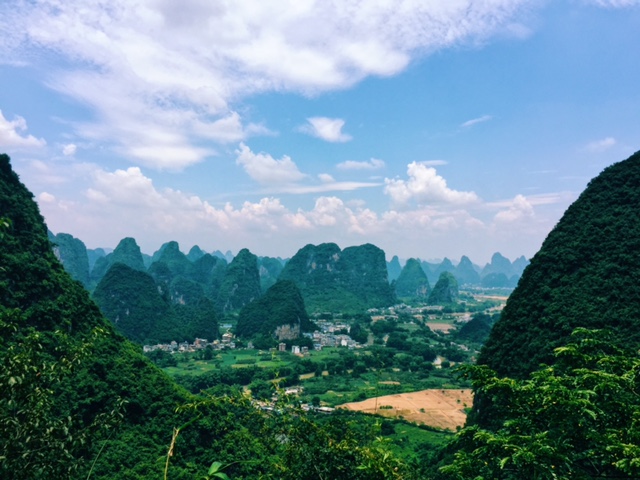 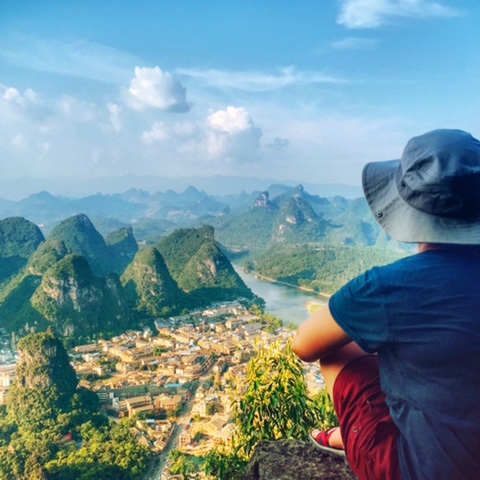 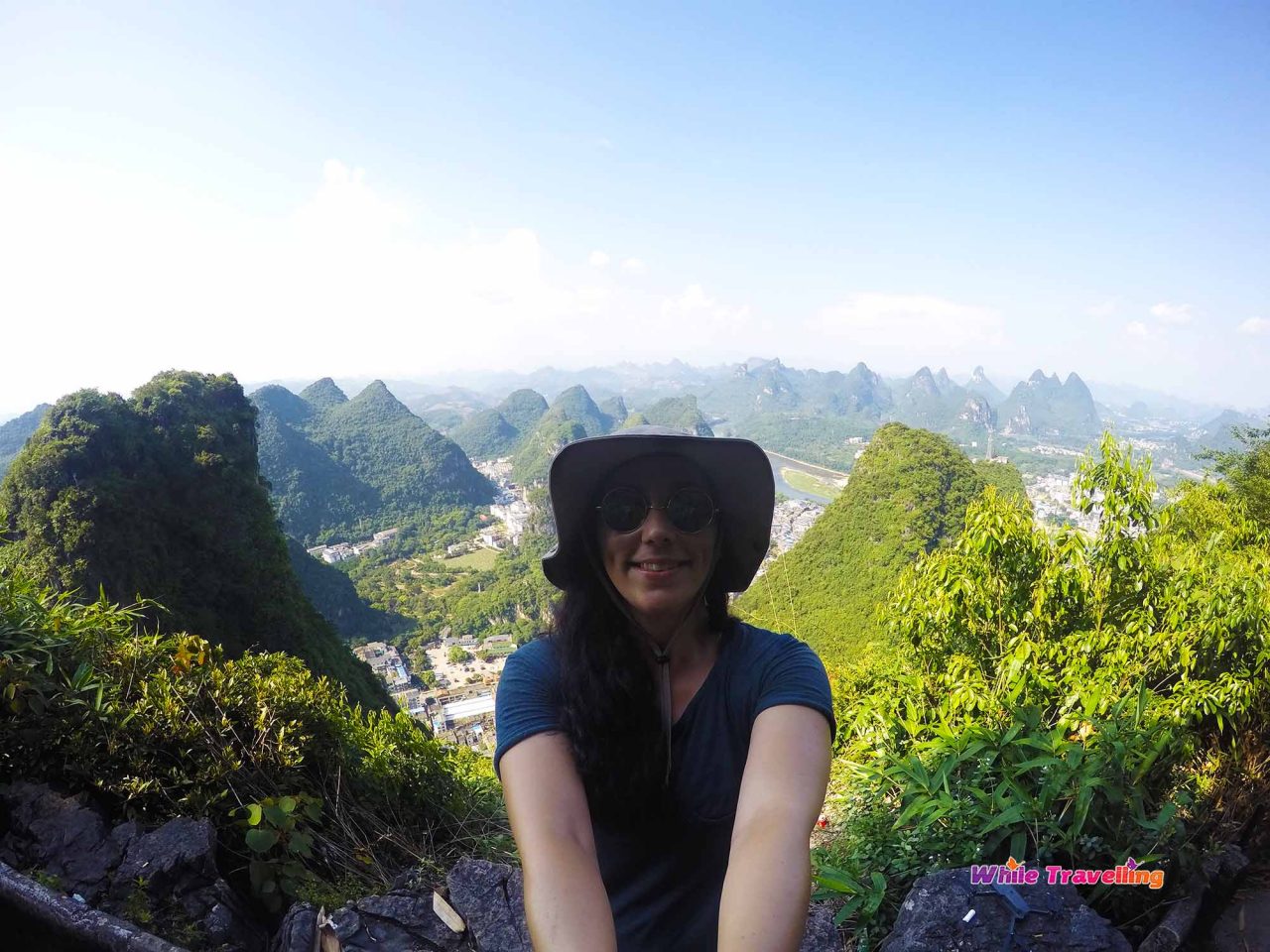 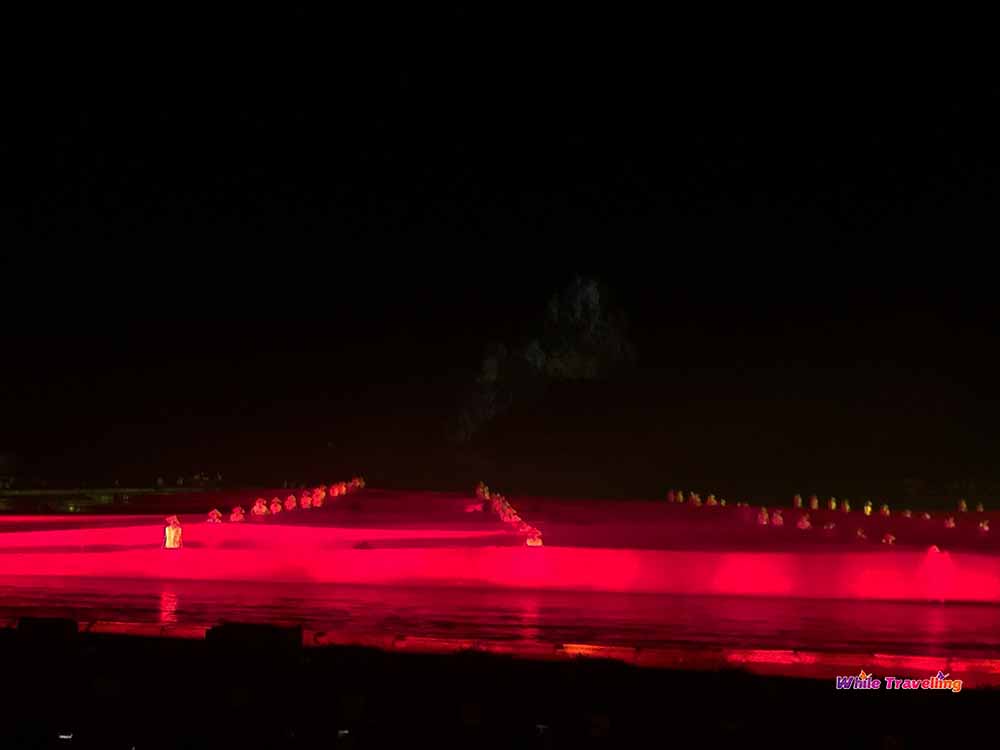 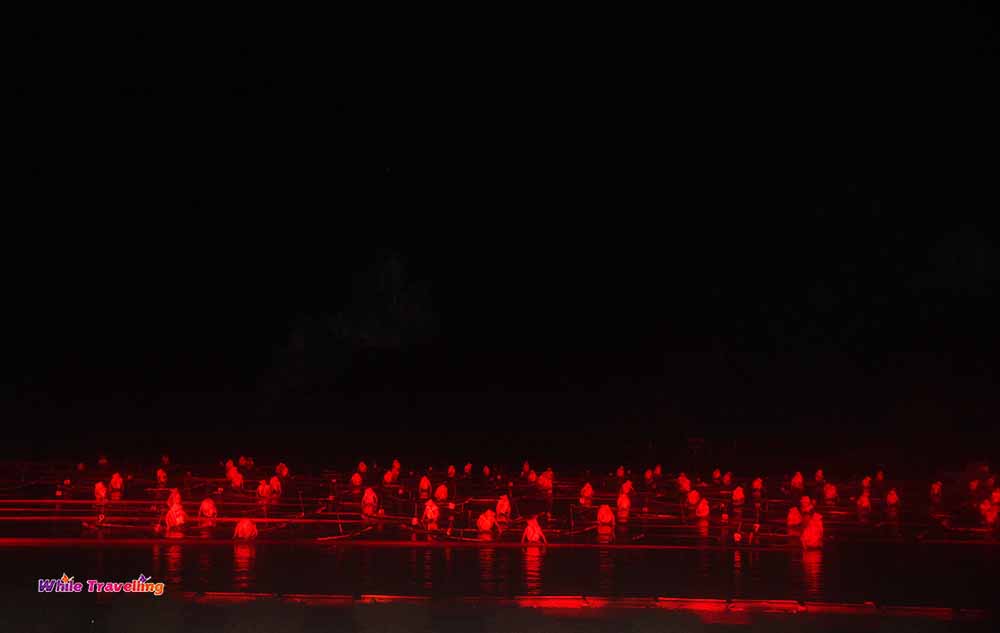 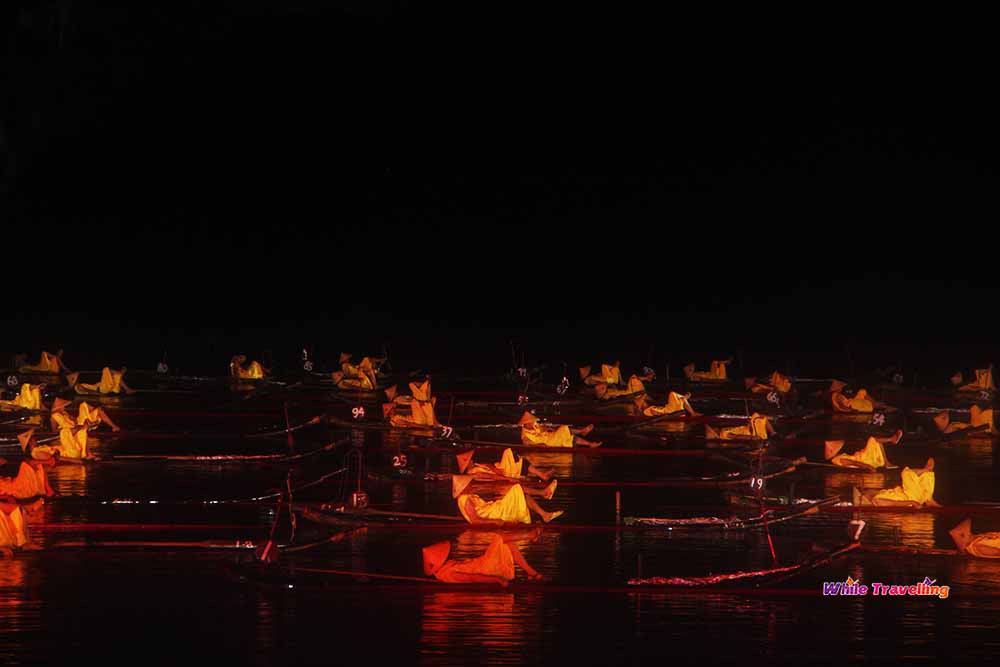 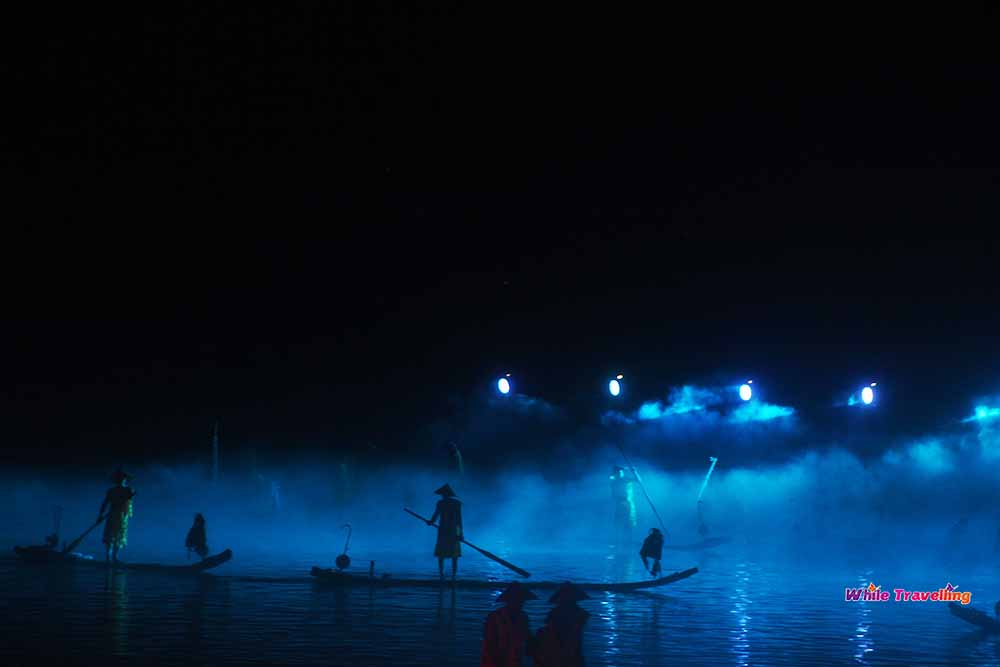 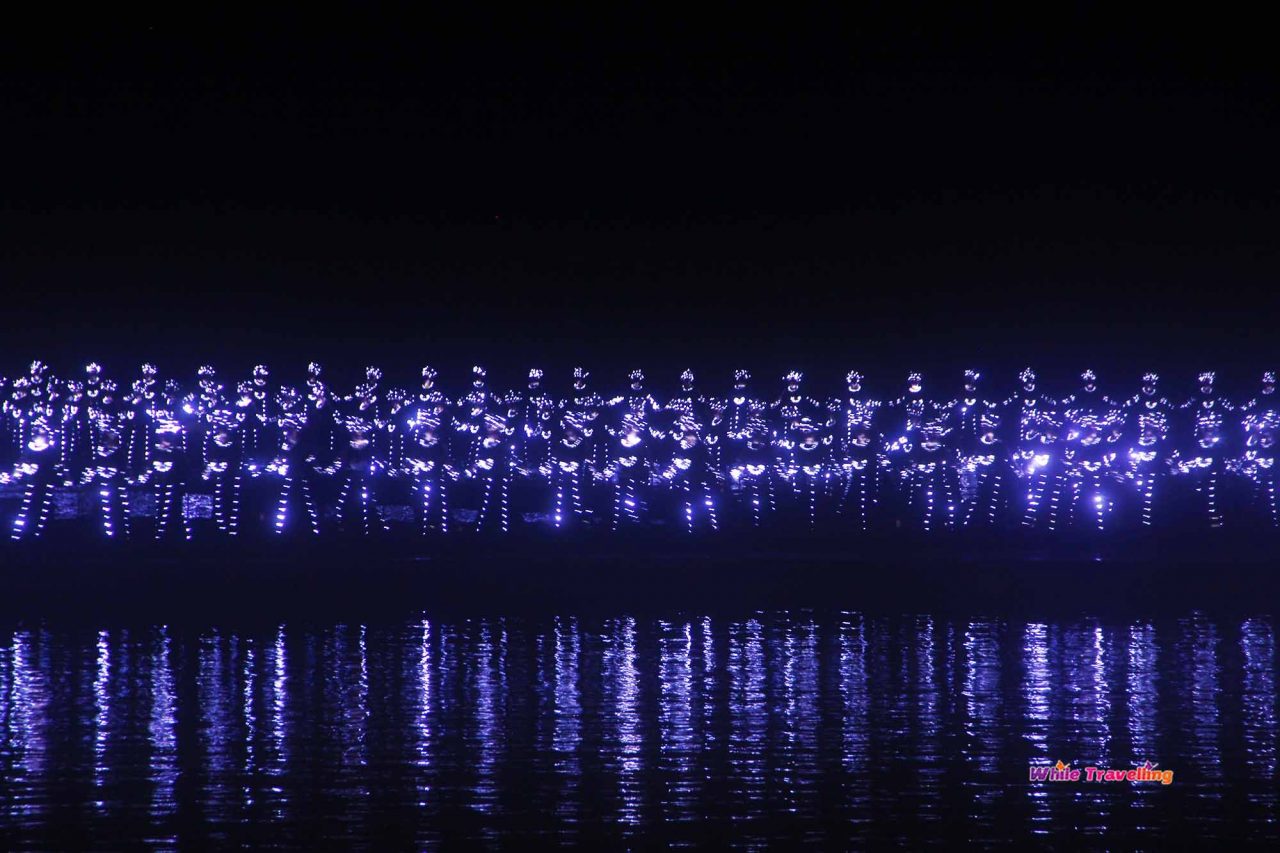 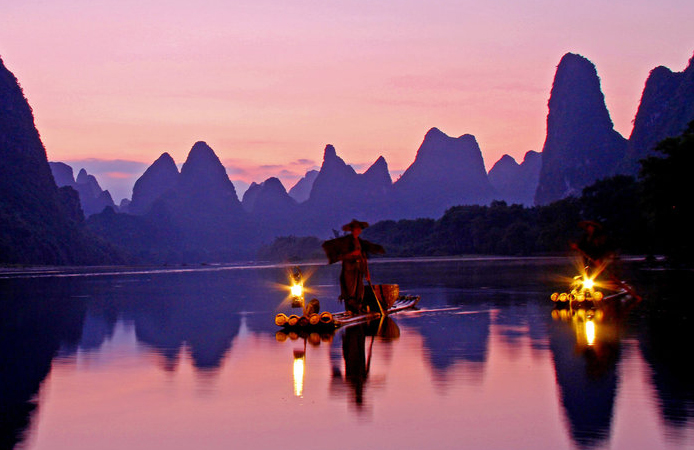 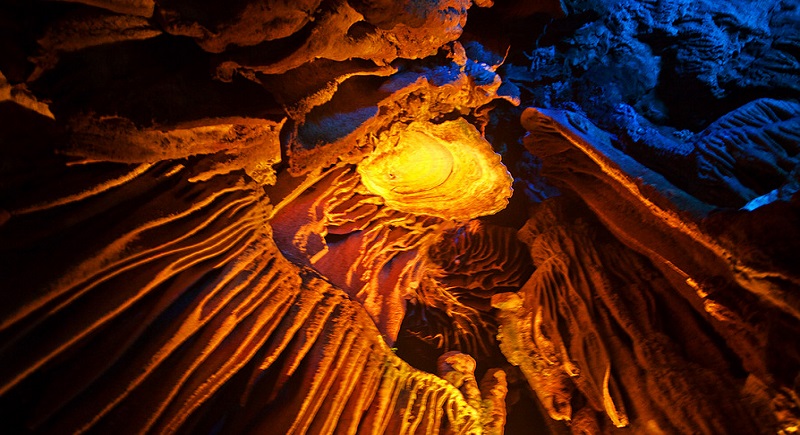 It's time to pay the bills, but how and where? Here is another post about the expat life in Shanghai. As you can remember...